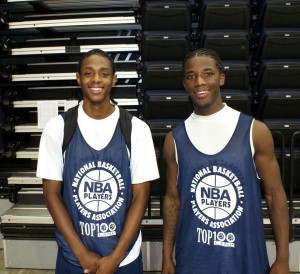 Kenny Boynton Jr. (2009) scored 26 points leading his team to a win in the open division championship game of the Reebok Summer Championships just outside of Las Vegas.

Breakdown lost the second game of the tournament to D-One Sports, but this game was never in doubt as indicated by the 81-64 score.

It was Knight that helped his team in the two prior games where he scored 25 and 22 which was a key to advancing.  Team Breakdown finished the event 8-1.

Boynton and Knight told the Blue Devil Nation at an earlier event that their goal was to win the title and both mentioned coming close wasn't the way they wanted to close out the summer.  Their team lost in the final to Belmont Shores last year.  Kenny Boynton, of course is being heavily recruited by the Blue Devils and has long been their top target in the class of 2009.