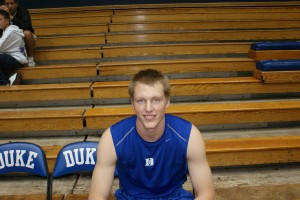 uch do it all?  That versatility is what rising sophomore Kyle Singler brought to the table last season on his way to being named the ACC Rookie of the Year.

It's no secret that Kyle wore down a bit last year, so he took the off season to reflect and address what he could do to prevent that from happening again.  "I took some time off and rested a bit, spending a lot of my time in the weight room and playing a lot with the guys too," said Singler.

A lot of the rest and relaxation time was spent at his home in Medford, Oregon.  "It's always good to go back home but some things change.  There were times when I just wanted to be back here, but it allowed me to get fresh and finally eat some good food."  Kyle looks bigger and certainly more defined, currently weighing 235 pounds which is a 20 pound gain.

When Singler mentioned good food, he was referring to his Mom's home cooking.  "I just packed it (weight) on but I didn't work out as much.  When I got back to campus I started lifting," said Singler, who then quickly said that he monitored the process closely in order to not lose any speed or agility.

When I asked how he might keep himself fresh during the season, he replied, "Last season was just really different for me.  Playing college is just totally different than what you would expect.  A lot of things I did last year were new to me, but now I have that experience and know what to expect.  I'm excited for this season.   You get a fresh start and I know what to expect.

There were occasions when Singler had to take on the big man for the opposing team.  If that is the case again this season, he will be up for the challenge but he does expect some help.  "I will be playing the same position as I did last year, but I won't have to be guarding the "five" as much as did last year.  We are deeper and have a lot of guys that can play down low this year if we stay healthy."

If Singler continues to improve upon his already solid game, the NBA questions will become more frequent.  "It's not something I think about day in and day out and I have to leave this year or something like that.  It's been one of my goals and one of my dreams.  I've just got to keep working hard and I'm in college right now and I'm here to win a Nation Championship," said Singler.

Much speculation has centered around the fact that the top of his class of 2008 has already moved on and that this might pressure the budding star to do the same, but Kyle seems to be running his own race for preparation.  "I would definitely look into it, but right now I'm here in college and I wouldn't trade it for anything."

Side Bar - Singler played a few games in the NC Prom Am at NCCU over the summer.  The game reports can be found in our archives.  Singler is very actice in the "Read with the Blue Devils" program which serves the Durham Community.  Singler's three blocks in last season's opener tied him with the most in a collegiate debut with Mike Gminski, Cherokee Parks and Cameron Hall.[/private]