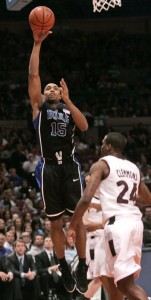 Duke got a little bit defensive on their way to a 83-58 win over Southern Illinois to advance to the finals of the 2K Coaches for Cancer Classic in New York City.  Going into the game, there was much talk of the Saluki's defense, but by games end Duke proved that they are known for their man to man prowess as well.

Duke shot an incredible 40 of 47 from the free throw stripe during a contest in which they struggled in the first half offensively.  The bright spot was Gerald Henderson who scored 20 points not to mention gaining the ESPN Play of the Day on a thunderous dunk.

He was helped by the continued good play of Brian Zoubek, who tallied 10 points and 6 rebounds in just 18 minutes of play.  Singler and Scheyr contribute 13 apiece, putting four Devils in double figures.  Duke advances to play Michigan, an upset winner over UCLA this evening.

The game went pretty much as our preview said it would in that Duke used the first game to adjust to MSG and got one of their key contributors in Henderson to step up.[/private]