[private]Ryan Kelly signed his letter of intent today which is the first day of the early signing period.  Kelly, a 6-10 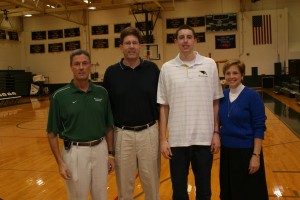 power forward, is ranked by scout as the #3 power forward and #11 overall player in the Class of 2009.  In July, Kelly was a starter for the USA Men’s Basketball U18 Team that won a silver medal at the FIBA Americas U18 Championship in Formosa, Argentina. As a junior at Ravenscroft, he was named the 2007 TISAC Conference Player of the Year, averaging 23.7 points, 8 rebounds and 4 blocks per game.[/private]