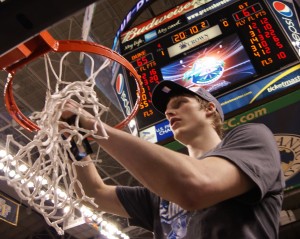 DURHAM, N.C. – Duke seniors Kyle Singler and Nolan Smith headline a list of 20 players named to the 2010 USA Basketball Men’s Select Team as announced by USA Basketball on Thursday. The team, featuring the top upperclassman in the NCAA, has been selected to train against the USA Basketball Men’s National Team during its upcoming July training camp in Las Vegas.

“We believe bringing in a USA Basketball select team to train against the USA National Team will help our team get better prepared for the upcoming FIBA World Championship,” said Jerry Colangelo, USA Basketball chairman. “In 2007 and 2008 we brought in to the national team training camps USA select teams comprised of young, up-and-coming NBA players and that proved not only beneficial for our national team, but for those select team players who got a great training opportunity and became involved in USA Basketball’s pipeline.  This will be a tremendous opportunity for these collegians to get a look at the next level.”
USA Basketball Men’s National Team, in preparation for the Aug. 28-Sept. 12 FIBA World Championship, will open its 2010 training with a July 19-24 team training camp in Las Vegas. The USA training camp will feature daily practice sessions from 12-3 p.m. (PDT) July 20-23 at UNLV’s Cox Pavilion. The USA practices are closed to the general public. The camp will culminate with the 2010 USA Basketball Showcase, a Blue-White intra-squad game that will be held on Saturday, July 24, 7 p.m. (PDT) at the Thomas & Mack Center on the campus of UNLV.  The USA training camp will also feature daily practice sessions from 12-3 p.m. (PDT) July 20-23 at UNLV’s Cox Pavilion. Tickets are now on sale for the 2010 USA Basketball Showcase.  Tickets are priced $75, $50, $35 for plaza seats and $18 and $12 for balcony and can be purchased by calling 866-388-FANS or on line at www.UNLVtickets.com.
Select Team members with prior USA Basketball experience include Mack, Shurna and Thompkins who were members of USA Basketball’s 2009 U19 World Championship Team that finished 9-0 in New Zealand to claim the gold medal.  Additionally, Singler and Smith were teammates on the USA’s U18 Championship that captured gold at the FIBA Americas U18 Championship and they were again teammates on the 2007 USA Junior National Select Team that defeated am international select team in the Nike Hoop Summit.  Hopson was a member of the victorious 2008 USA Junior National Select Team in the Nike Hoop Summit, while Walker was a member of the 2008 USA FIBA Americas U18 Championship Team that collected a silver medal. Johnson has USA Basketball experience through the 2009 USA Basketball Trials.

Both Romar and Wright have extensive international experience as USA Basketball coaches. Romar was head coach of the USA’s 2006 FIBA Americas U18 Championship Team that won gold, and an assistant coach with the 2003 USA Pan American Games and 1997 USA 22 & Under World Championship teams.  Wright was head mentor for the USA’s 2007 Pan American Games Team and led the 2005 USA World University Games Team to a gold medal showing, and was an assistant with the 2000 USA World Championship for Young Men Qualifier.

Featuring players from 19 different colleges, Duke is the only institution to feature two players. The 20 Select Team players include nine who will be seniors in 2010-11 and 11 who will be juniors.

Eight collegiate conferences are represented, with the ACC, Big Ten and Big 12 each listing four, while Atlantic 10, Big East and SEC each have a pair, respectively, and the Horizon and Mountain West have one player on the roster.