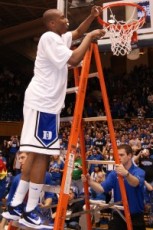 Los Angeles- The John R. Wooden Award Preseason Top 50 list was announced today by The Los Angeles Athletic Club.  The list is comprised of 50 student-athletes who, based on last year's individual performance and team records, are the early frontrunners for college basketball's most prestigious honor. The Women's Preseason list will be released later this week.

Transfers, freshmen and medical redshirts are not eligible for the preseason
list. These players and others who excel throughout the season will be
evaluated and considered for December's Midseason list and the official
voting ballot released in March. The National Ballot consists of
approximately 20 top players who have proven to their universities that they
are also making progress toward graduation and maintaining at least a
cumulative 2.0 GPA.  The Wooden Award All-American Team will be announced
the week of the "Elite Eight" round during the NCAA Tournament.

The 35th annual Wooden Award ceremony, which will include the announcement
of the Men's and Women's Wooden Award winners, a special tribute to Coach
Wooden and Wooden Award founder Duke Llewellyn, and the presentation of the
Wooden Award All American Teams and the Legends of Coaching Award, will take
place the weekend of April 8-10, 2011.
About the John R. Wooden Award

Created in 1976, the John R. Wooden Award is the most prestigious individual honor in college basketball.  It is bestowed upon the nation's best player at an institution of higher education who has proven to his or her university that he or she is making progress toward graduation and
maintaining a minimum cumulative 2.0 GPA.  Previous winners include such
notables as Larry Bird ('79), Michael Jordan ('84), Tim Duncan ('97), Blake
Griffin ('09) and Maya Moore of Connecticut ('09). Ohio State's Evan Turner and Connecticut's Tina Charles won the Award in 2010.

Follow the candidates and get the latest news throughout the season by
logging on to www.WoodenAward.com.  For more information on the John R.
Wooden Award, please contact the Wooden Award staff at 213-630-5206 or email at woodenaward@laac.net.