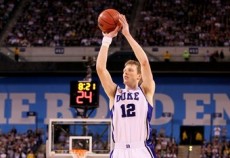 • Duke faces UNC Greensboro on Wednesday, Dec. 29 at the Greensboro Coliseum. Tipoff is set for 7 p.m.
• The game is being televised by ESPNU with Rob Stone (play-by-play) and Jay Bilas (analyst) calling the action.
• Duke is ranked No. 1 in the AP and ESPN/USA Today Coaches Poll, while UNC Greensboro is unranked in both polls.
• The Blue Devils enter the contest 11-0 on the year, while the Spartans are 0-11 overall.
• Duke has won 21 consecutive games entering Wednesday’s contest.
• Duke is seeking its 38th straight win against a team outside of the traditional power conferences (Big Ten, Big East, SEC, ACC, PAC-10, Big 12).
Duke vs. UNC Greensboro• Duke is 8-0 all-time against UNC Greensboro with a 2-0 mark at the Greensboro Coliseum.
• Duke has a +37.8 margin of victory in the eight wins over UNC Greensboro.
• Duke has scored 90 or more points in five of the eight meetings between the two schools.

Numbers Game
l Mike Krzyzewski is one win shy of moving into second place on the NCAA all-time wins list. He enters Wednesday’s game tied with Dean Smith with 879 career victories.
l The Blue Devils have won 21 consecutive games dating back to a 79-72 loss at Maryland on March 3, 2010. Duke has won 29 of its last 30 games.
l Duke has won 11 straight games at the Greensboro Coliseum. The Blue Devils’ last loss was a 95-87 overtime defeat to Maryland in the 2004 ACC Championship game.
l Mike Krzyzewski is 38-9 with the Blue Devils at the Greensboro Coliseum. Duke has won five ACC Championships under Coach K at the venue.
l Duke has won 38 consecutive games against teams outside the traditional power conferences (Big Ten, Big East, SEC, ACC, PAC 10, Big 12). Virginia Commonwealth’s 79-77 win over Duke in the 2007 NCAA Tournament was the Blue Devils’ last loss to a team from a non-power conference.
l Duke has scored 80 or more points in 10 games this season. The Blue Devils have won 25 consecutive games when scoring 80+ points. Duke is 492-46 under Coach K when scoring 80 or more points in a game.
l Seniors Kyle Singler and Nolan Smith have combined for 89 points in the last two games. Both players scored 20 or more points in the wins over Saint Louis and Elon. Singler and Smith combine to average 34.1 points per game on the year.
l Kyle Singler is averaging 20.7 points per game while shooting 50.0 percent (9-of-18) from three-point range in the last three games.
l Nolan Smith is expected to make his 50th consecutive start on Wednesday against UNC Greensboro. Duke is 44-5 (.898) during his string of starts.
l Duke is averaging 48.7 ppg. in the second half of play. The Blue Devils are shooting 55.9 percent (171-of-306) from the field, including 55.3 percent (63-of-114) from three-point range after halftime.
l The Blue Devils lead the ACC and rank third nationally in three-point field goal percentage (.436) and three-point field goals (9.6 3pg.). Duke has made 10 or more threes in a game five times and has made 49 more treys than its opposition on the year.
l Duke ranks third in the NCAA with a +25.8 scoring margin. The Blue Devils have won six games by 30 or more points.