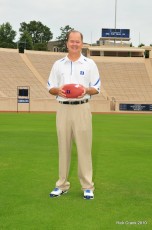 Under the direction of head coach David Cutcliffe, the Blue Devils will open the 2012 season at home against FIU on September 1. One week later, the Blue Devils travel to Palo Alto, Calif., to meet Stanford. Duke then returns home for consecutive non-league contests against N.C. Central (September 15) and Memphis (September 22).

Reigning conference champion Clemson will visit Wallace Wade Stadium on November 3 and, following an open week, the Blue Devils close the season on the road at Georgia Tech (November 17) and at home versus Miami (November 24).

Duke returns 44 lettermen and 17 starters for Cutcliffe’s fifth squad. The Blue Devils are in the midst of spring practice and will host the program’s annual Spring Game on Saturday, March 31 at Wallace Wade Stadium. Season tickets are on sale now and may be purchased at www.GoDuke.com or by calling the Duke Athletic Ticket Office at 1-877-375-3853.