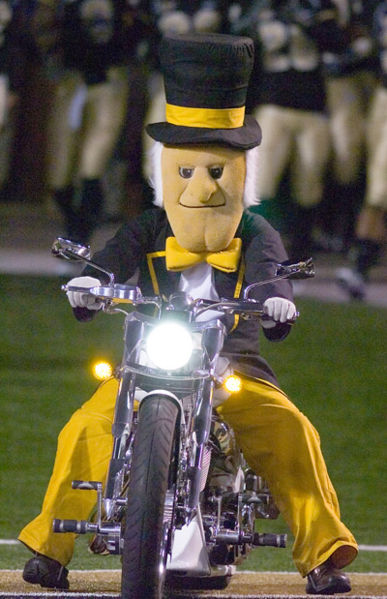 Duke fans know this week's opponent all too well - the Wake Forest Demon Deacons. The Blue Devils have dropped 12 in a row to their in-state rival, and on Saturday, face another talented Wake Forest team when they travel to Winston Salem. Jim Grobe's squad is 3-1 on the year; much like Duke, they were blown out on the road by a top-10 opponent, but have found ways to win at home. To give us an inside look at the Demon Deacons, BDN welcomes in Dan Collins of the Winston-Salem Journal. A native of North Carolina and veteran journalist, Collins has covered the Wake Forest beat since 1992. BDN is thrilled to have his expertise on this year's Wake Forest team.

As Duke looks to build their football program and compete in the ACC, they look to Wake Forest's recent success as a blueprint. To what do you attribute the Demon Deacons' run under Coach Grobe? Coach Grobe recently stated he wasn't sure how good this particular Wake Forest team is. What is your overall assessment of this squad, and where do you think they will end up in the ACC Atlantic Division?

The prevailing factors to Grobe's success, as I see them, have been the redshirting program that has allowed good but largely untapped high school players to grow and develop into competitive and sometimes standout college players, and a sharp and (until recently) exceedingly stable staff with a keen eye for overlooked talent. As for this year's team, I asked Grobe Tuesday how good is his team. He said he has no idea. Truth is, I don't either.  If the return of Nikita Whitlock stabilizes the defense and the patchwork offensive line comes together, the Deacons have a chance to win eight or nine games. If none of that happens, they could also lose nine in a row, like in 2010.

Tanner Price has quickly matured into one of the ACC's top quarterbacks, and he has a talented weapon in WR Michael Campanaro, who ranks at the top of the ACC in receptions this year. With a veteran in Josh Harris at RB, Wake Forest seems to have the potential to put up points this year. Last week, they were able to put up 49 points on Army, but struggled earlier in the year and rank 10th overall in the conference in scoring. What has been the source of the offensive inconsistency so far this year?

The strength of this team is that it has four players who are first-team All-ACC caliber players in Price, Campanaro, Whitlock and cornerback Bud Noel. And guys like Harris, linebackers Mike Olson and Justin Jackson and cornerback Kevin Johnson could be as well by the time their careers are done. Obviously, no one expects all of them to make first-team All-ACC, but they match up well with any other players in the conference at their position. Price wasn't good at FSU, and he didn't have a great game against Army. But he did drive the Deacons 93 yards for a game-winning touchdown in the final 6 1/2 minutes against North Carolina, so I don't believe anyone is worried about that position. The biggest reasons for the inconsistency has been the revamped offensive line with only one returning starter (center Garrick Williams) from last year and the lack of another front-line receiver to complement Campanaro.

Much like the Blue Devils, the Demon Deacons have allowed points and yards to opponents this year, and both units have seen their share of injuries. Aside from the health issues, what has been the source of Wake Forest's defensive struggles early in the season? Is there any truth to the rumor that Nikita Whitlock will play Saturday, and how effective do you expect him to be?

Grobe has attributed much of the defensive woes to the fact the Deacons have played a team they knew little about in Liberty, one of the best teams in the nation in FSU and an Army team that leads the FBS in rushing. That said, the loss of Whitlock for the past 2 1/2 games has been huge. Senior linebacker Riley Haynes called Whitlock the heart and soul of the Wake defense, and anyone close to the program would agree. Whitlock said he will return from his sprained ankle to play this week. Grobe said he's more concerned about how well Whitlock will be able to play. Whitlock didn't really do much in his first game and a half against Liberty and North Carolina, so it's time he started wreaking some havoc.

Despite Wake Forest's dominance in the series, the Blue Devils and Demon Deacons have produced some memorable and competitive games over the past decade. Many have pointed to this becoming a more intense football rivalry than Duke and UNC. What is the Wake Forest perspective on the Duke rivalry? How important is this week's game to the Demon Deacons and their season?

All the people I talk with openly acknowledge how lucky they've been in the series. Having seen them all, I agree. I can think of three plays right off the top of my head that decided games that Duke probably should have won, the flubbed chip shot by Joe Surgan that Chip Vaughn blocked with his elbow in 2006, Thad Lewis' underthrown pass to Eron Riley that Alphonso Smith intercepted in the endzone in 2008 and Chris Givens' 66-yard touchdown last season that was the only play the Deacons really made in a second half otherwise dominated by the Blue Devils. Wake, under Grobe, has generally been better than Duke, but that would in no way explain the streak. As for the importance of this season's game, Wake plays at Maryland next week, has a week off, and then plays at Virginia. The Deacons have a good shot at both, which would make them 5-3 even with a loss Saturday. But I doubt they're thinking of Duke as anything but a must win.

Both Duke and Wake Forest rank in the bottom half of the ACC in a number of important statistical categories, such as scoring defense and rushing offense, but both teams have put together a 3-1 record in 2012. Many expect this year's game to play out much like the 2010 shoot-out in Winston-Salem, where the two teams combined to put up over 100 points. How do you predict Saturday's contest will play out?

My guess it will take quite a few points to win the game, in that both offenses are highly capable and both defenses still need to prove themselves. As for predicting who will win, that's really never been my thing.  I have been told by people who are into wagering that you should never bet against a streak. On the other hand, streaks are made to be broken. So I'll weasel out of this one. The game, after all, will be played. We'll find out who wins in due time.