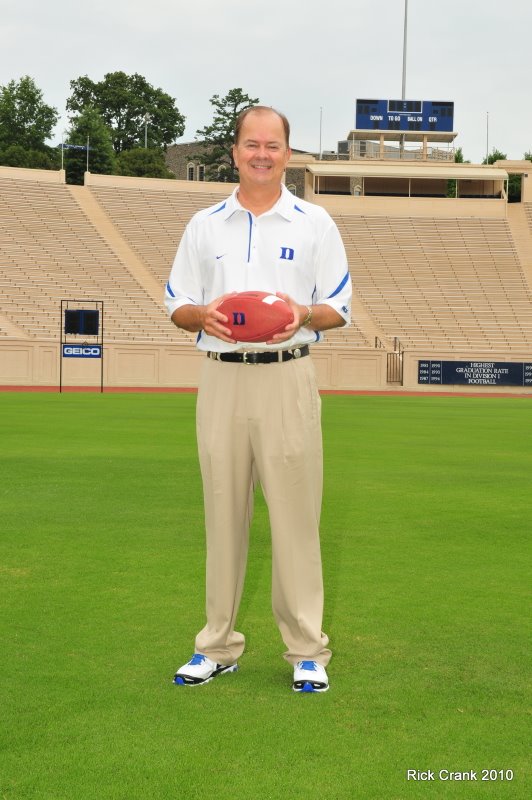 DURHAM, N.C. – Duke University Vice President and Director of Athletics Kevin White announced on Wednesday that the school and head football coach David Cutcliffe have agreed to a contract extension through June 30, 2019.

“Without question, we have already made great discernible progress since David’s arrival,” White stated. “However, as we assess our future – based on prospect evaluations, ongoing recruitment activity and player development – we are extremely excited, if not euphoric! To be sure, ‘Coach Cut’ represents just a great fit at Duke. David and the staff have done an exemplary job of leading the program, while subscribing to the highest intuitional ideals, both academically and athletically.”

Hired on December 15, 2007, Cutcliffe has directed the Blue Devils to six victories this season as Duke has achieved bowl eligibility for the first time since the 1994 season. This year’s accomplishments include a 5-1 record at home, the 33-30 victory over rival North Carolina that included a game-winning 14-play, 87-yard drive ending with Sean Renfree’s five-yard touchdown pass to Jamison Crowder with 13 seconds left in the contest, and Conner Vernon becoming the ACC’s all-time leader in both pass receptions and receiving yardage.

“This business is about people, and Karen and I could not be happier with the people we’ve associated ourselves with here at Duke,” Cutcliffe said. “President Brodhead and Kevin White are the best of the best, and we are grateful for their support as we continue to build Duke’s football program. We’ve accomplished some of the goals we laid out five years ago, but are nowhere close to where we want to be.”

In four-plus seasons in Durham, the Birmingham, Ala., native has guided Duke to 21 wins – 11 more than the program’s total in the previous eight years.