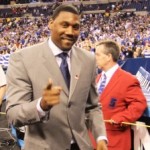 "This will be a seamless transition for the Duke Basketball program,” Krzyzewski said. “Having served in an assistant coaching role previously, Nate is the perfect choice for this position. He has been a valuable member of our program since his playing days and he has certainly earned this opportunity.”

James has spent the past six seasons as a member of the Duke basketball staff, serving as an assistant strength and conditioning coach during the 2007-08 season and an assistant coach from 2008-11. James will begin his second stint as a Duke assistant coach following the departure of associate head coach Chris Collins, who was announced as the new head coach at Northwestern Wednesday. Collins will coach Duke through the remainder of the 2012-13 season.

A four-year letterwinner and two-time team captain at Duke from 1996-2001, James helped lead Duke to the 2001 NCAA Championship and was an All-ACC third team selection in 2001. During his first stint as an assistant coach at Duke, the Blue Devils won three straight ACC Championships, the 2010 NCAA Championship and compiled a 95-17 record.