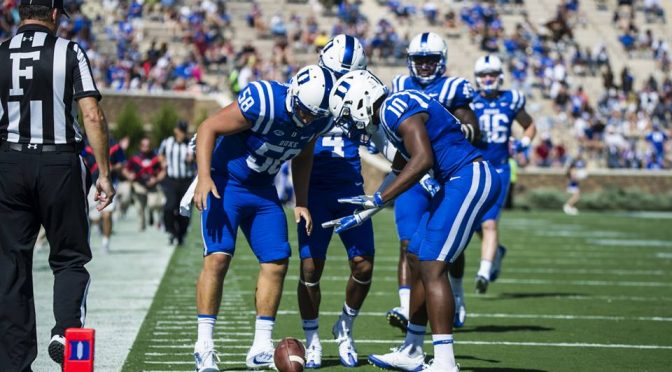 The Duke Blue Devils lost their third consecutive game 17-10  to Florida State on Saturday.  Duke is now 4-3 overall and 1-3 in the ACC with Pitt visiting Wallace Wade Stadium this coming Saturday.

Duke can play with the likes of FSU

The Blue Devils have continued to recruit well of late, but the Seminoles are on another level.  Duke proved it can hang with teams that at chock full of four and five-star players.  They had a good defensive game plan going in, but Florida State ended up going with a power running game and ten yard passes to win the game.

Not quite ready for prime time

Had Duke not turned the ball over on a half back pass from Shaun Wilson to close the first half and taken better advantage of turnovers, they could have defeated he Seminoles for the first time in school history.

Duke wasted a great opportunity at the end of the first half and the Seminoles looked beatable going into the locker room.  Duke would tie the game up at 10-10, but the Seminoles produced a big run while Duke failed to have any explosive plays.

The game was much closer than most have been in the series, but it was also clear that Duke is not quite ready to get over the hump versus a superior talented team just yet.

The good, the bad and the ugly

The Duke running backs of Shaun Wilson and Brittain Brown great stat lines in the game.  They averaged about what the Florida State backs did on yards per carry.

The bad is they ran the ball 14 less times than the duo of Cam Akers and Jaques Patrick and that translated to losing the time of possession battle 36:44 to 23:16.  One has to feel that a few more hand offs would have played out well for Duke which struggles finding their wideouts.

The ugly continues to be their punt reception game.  Balls are not fair caught and that means opponents lead the nation in punting net yards when playing Duke.

Helmets off to T,J, Rahming for his 8 catches which went for 111 yards.  Past his play, the wideouts had another very sub par game.

Austin Parker had his best day of punting in my humble opinion.  He put four balls inside the opponents 20 yard line and averaged 46.2 yards per punt.  He also made a key 37 yard field goal in the game.

Jeremy McDuffie solidified himself as a future leader int he defensive backfield with his interception and being in on 9 tackles.  His teammate Mark Gilbert came up with a pick as well.

Speaking of veterans, Alonzo Saxton was in on a game high 14 tackles and still looked fresh in the post game media interviews.

Pitt will be the next opponent on Brooks Field this coming Saturday.  The Panthers mopped up the field with Duke a year ago, running up the score as best they could

If Duke cannot get up for this game and win in decent fashion, trouble is possibly looming with hopes of a six win bowl eligibility season.  The reason Duke could be underdogs the rest of the way with Army (5-2) maybe being an exception.   But even that game is on the road.

The bottom line is Duke needs to get back in the winning column and the game versus Pitt is a must win.