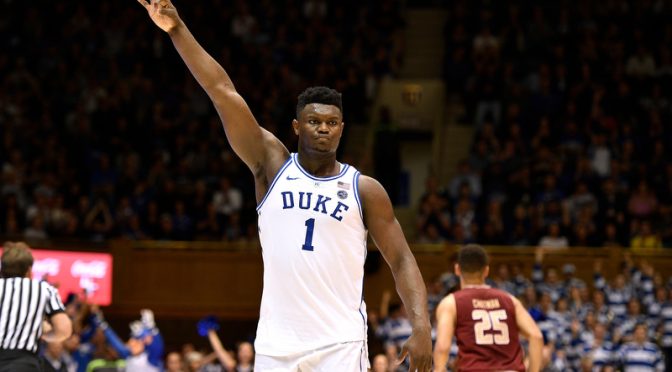 The Duke Blue Devils gained their 20th win of the season with a  victory over Boston College in Cameron Indoor Stadium.  The win pushed the Blue Devils ACC record to 8-1 on the season and 20-2 overall.

Duke would go into the halftime locker room trailing by 2 as the Eagles kept it close with their 3 point shooting while Duke was 1-14 from three.  The Blue Devils came out of the gate quick in the second half when and an 8-0 run forced an early Eagles timeout and it was all Duke from that point on,

Zion Williamson had another double-double for the Blue Devils with 16 points and 17 rebounds.

R.J. Barrett was saddled with three early fouls but adjusted and ended he game with 19 points and 5 rebounds.

Cam Reddish led Duke with 24 points, one shy of his career high of 25 against Army West Point.

The Blue Devils outscored the Eagles 52-35 in the second half which pleased Duke Coach Mike Krzyzewski.  Perhaps Duke was looking ahead to Virginia but Boston College made them show up after a strong opening.

One of the main reasosn Duke won was their work on the defensive boards,  Duke also took advantage with points off turnovers where they outscored their opponent 17-7.

Duke will face Virginia in Charlotteville this Saturday at 8:00 where the winner takes possession of first place in the Atlantic Coast Conference.