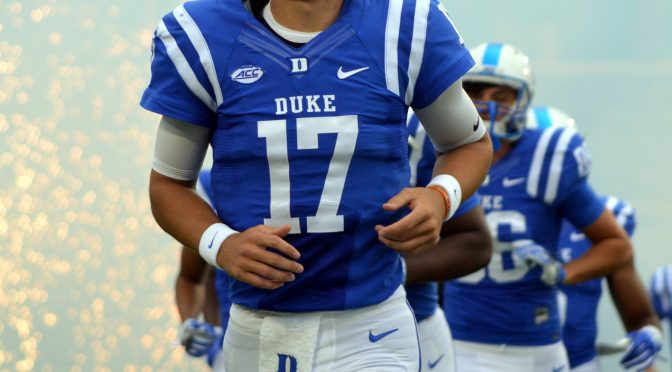 DURHAM, N.C. – Former Duke quarterback Daniel Jones was selected in the first round of the 2019 NFL Draft by the New York Giants with the sixth overall pick.

“I can’t have enough praise for Daniel, his family or the process he went through to make a decision to bypass a last year here,” Duke head coach David Cutcliffe said.  “Anytime you make a decision that is something you really want to do, you make a right decision. There’s a joy in watching players who have worked hard and been committed to the process. Daniel Jones embraces something we believe in here – real swag is no swag.”

Jones, a 6-5, 220-pound native of Charlotte, N.C., attended the NFL Draft in Nashville. He is the highest Blue Devil draft pick since Mike Junkinwent fifth overall to the Cleveland Browns in 1987, and just the seventh Duke player to be selected in the opening round of the draft. Jones is the 14th Duke draft pick by the Giants and the first since Drew Strojny was a seventh round choice in 2004. Jones is also the first Blue Devil quarterback to be chosen in the NFL Draft since Sean Renfree went in the seventh round to the Atlanta Falcons in 2013.

“He is big, intelligent and has a terrific arm,” Cutcliffe added. “His work ethic and commitment to excellence is right along those same lines. He has a focus on his job and he doesn’t distract easily. He is thirsty for this. It’s refreshing that Daniel’s passion is not money, but success as a player. I’ve never seen him lose his focus.”

In 2018, Jones completed 237 of 392 (.605) passes for 22 touchdowns and nine interceptions while rushing for 319 yards and three TDs on 104 attempts.  The regular season was highlighted by a pair of ACC Quarterback of the Week citations following wins over Northwestern and North Carolina.  In the triumph over the Tar Heels, his third as Duke’s starting quarterback, Jones threw for 361 yards while rushing for 186 yards to post the fifth-highest single-game offensive yardage total (547) in ACC history, also the most by a Blue Devil in a single contest. He capped the season by earning Walk-On’s Independence Bowl Offensive Player of the Game honors after leading Duke to a 56-27 win over Temple thanks to a bowl-record 423 passing yards and six total touchdowns (5 passing and 1 rushing).

The selection of Jones is Duke’s first NFL Draft pick since Laken Tomlinson (first round) and Jamison Crowder (fourth round) were chosen in 2015.