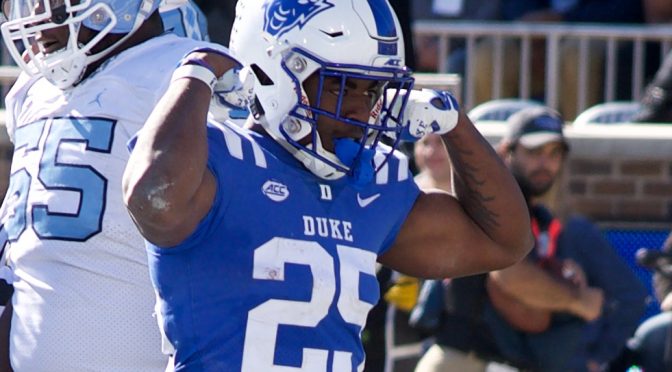 The Duke Blue Devils take on North Carolina A&T at 6:00 tomorrow in Wallace Wade Stadium.  The weather will be sunny and warm as Hurricane Dorian has veered away. Duke is a labeled a 26 point favorite.

It was no surprise that the Blue Devils struggled against an immensely talented Alabama squad which seems destined to play for another national title.  While Duke showed glimpses of good things to come, the offense struggled to find its identity.  The best news is that there were no major injuries and that the Blue Devils.

North Carolina A&T is relishing the opportunity to knock off an ACC foe.  They took out East Carolina a season ago and defeated a ranked Elon team on a 52-yard field goal last week.  The Aggies are currently ranked 14th in the country in the FBS national rankings.

More on the Aggies

First of all, they can play.  They have a stingy defensive scheme designed to hold teams down in scoring.  The Aggies are a step up from NCCU, a team they demolished last season on their way to winning their conference.  Duke Coach David Cutcliffe said they are balanced in all aspects of the game and he is right.  Duke will face a very pesky team seeking to pull off one of their biggest upsets in school history.

We saw Duke tease some new offensive formations and schemes last week.  The Blue Devils will show more of what we can expect to see as the season progresses this week  It will be important for Duke to establish the ground game in order to get the passing game going.

The defense hopes to stiffen up

Even though it was juggernaut Alabama scoring 42 points a week ago, the defense looks to show some pride this week with a bounce-back performance.  This side of the ball was considered a strength going into the season, so expect the unit to play with a reckless abandon this week trying to shut down the Aggies attack.

The Blue Devils are playing some young players this season and those guys will get more snaps this week if all goes as planned.  Expect to see more skilled players break out this week, especially in the young wideout group.

Duke is anxious to even their record up at 1-1 and they are also intent on showing more of the style we will see this season.  The Blue Devils will likely still have some growing or timing pains, but they should be able to show off their talent as this game progresses.  There is a feeling of immense hunger this week and they want to show last weeks lopsided loss was an anomaly.

On the other hand, the Aggies are capable of taking advantage of mistakes and they are a legitimate football program capable of putting a scare in Duke if the Blue Devils get off to a slow start.

It is crucial for Quentin Harris and the offense to get rolling sooner rather than later.  The Aggies know how to play a frustrating style of football if they get the lead, so a fast start is a must for Duke.

Duke should win this game and they need to win this game.  The Blue Devils David Cutcliffe will be 10-3 in home openers with a win.