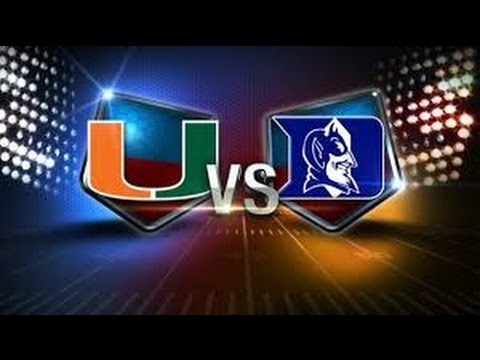 Duke Football plays its last regular-season game against Miami in Wallace Wade Stadium this Saturday. The Blue Devils can potentially make it to a bowl game with a win due to their APR ranking.

But let's be realistic here. Duke probably doesn't have enough offense to make that happen. It doesn't help that Miami is coming off their most embarrassing loss in a decade but it is hard to ignore that the Hurricanes beat Pitt, Florida State and Louisville all in a row before the upset happened. When you add in the fact that Duke defeated the Hurricanes a year ago, you can see why I think Miami will be looking to finish their season 7-5.

On the other side of the ball, Duke has been reeling. Duke lost the Victory Bell to UNC, was crushed by Virginia, Syracuse and Notre Dame and thumped by Wake Forest last week. The truth some may want to avoid or ignore is that Duke has steadily played worse as the season wears on.

Few remanents of confidence remain after the Blue Devils win over Virginia Tech. In fact, the team seems to be broken in that they cannot seem to create any lasting momentum.

Duke is a 9 point underdog in this game which seems low. There will be few people in the stands due to the Thanksgiving Day weekend and the fact the Hurricanes fans do not travel well.

I have done pretty well in the prediction department this season going 9-2 on game-winner predictions and 9-1-1 against the spread. I expect this will be the last game of the season and the pick is Miami 34 Duke 14 and time for Duke to regroup in the off season.