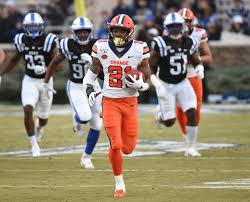 You did not have to worry about getting into a traffic jam when leaving Wallace Wade Stadium this past Saturday. The few people who were actually in the stands in cold and windy weather were gone well before the fourth quarter began and who could blame them?

Duke was a 10 point favorite over a Syracuse team seeking their first win but lost the contest, falling to 4-6 on the season with two games remaining on the schedule. But they lost by a score of 49-6 and my guess is that no team which has been favored by double-digits has been defeated so soundly anywhere in the nation all season long.

What we saw was an epic collapse and the team went off the rails in ways that has everyone asking questions. Now, those questions are nothing new. I do not have to mention what they are, for everyone who follows the team knows and has heard them for a while now.

Those questions came rushing back on social media and from anyone who saw the game yesterday. And if you were able to sit through the entire affair, you have hereby been dubbed the fan of the year.

The Duke offense was a punchless mess. There was a timeout on third and long earlier in the game with the score at 0-0 when Duke elected to run the ball, which led to a missed field goal and that set the tone.

In hindsight, it is easy to say Duke maybe should have thrown the ball, for they would not get many more chances in scoring position. But many did not need hindsight to see this was a drive wasted going for the safe points as the team is suddenly allergic to the endzone.

Maybe, the decision-makers did not realize that Duke was about to be rolled over and abused until games end by a Syracuse team that seemed hungry, better prepared and that wanted to be on the field. The Orange beat Duke more soundly than did Alabama in the opener or Notre Dame a week ago.

The problem here is nobody will mistake Syracuse football with the two aforementioned blue-blood programs. They were winless and let up 70 plus points to Maryland and, after that, every ACC team had their way with one obvious exception.

Yes, Duke has had some injuries, but that is a part of the game. There are just no viable excuses as to why the offense has become predictable to the point where every team prepares well for them as the season wanes on.

There are many more issues. Duke has not been coming out of the locker room adjusted and prepared. Their confidence is so thin, that an untimely bounce of the ball on an interception looks like it takes the wind out of their sails, creating the impression of a very fragile mental state.

It is hard to keep throwing dinks and dunks passes when the other team stacks the front. With so much traffic there, turnovers will happen. Just ask anyone who watched the Blue Devils commit three consecutive turnovers to start the second half, which all led to Syracuse touchdowns.

I personally picked Duke 5-7 at the start of the season. In some ways, I saw struggles coming. There were plenty of question marks and a brutal schedule and a quarterback going down they wanted to develop. But the team played well enough to create hope and expectations early in the season.

It is hard to fathom what has happened since Duke soundly defeated Virginia Tech on the road. The two teams went in different directions and that is what makes the latest result dumbfounding in nature.

Virginia Tech can win the Coastal by winning out. Duke has found itself looking like a team wanting to throw in the towel on the season of late.

The loss made several people bring up the collapse against Wake Forest a season ago. Duke was a mild favorite at home in that game only to lose in epic fashion on their own turf.

But Wake Forest was a bowl-bound team and that is not the case with the Orange, who were reeling most of their season before finding optimal success in Durham.

The reality is that the loss to Syracuse this season is more disturbing than the one to Wake a year ago.

One thing is certain, though. Between now and before next season the staff needs to take a good look at how they are doing things on the offensive side of the ball.

It would seem that a lot of problems start there. If you cannot control the clock a bit and put your defense in a good position then this backward spiral will continue.

Perhaps if there is an effort to fix one of the glaring weaknesses in the team of late, solutions to some of the other problems will start to fall into place.