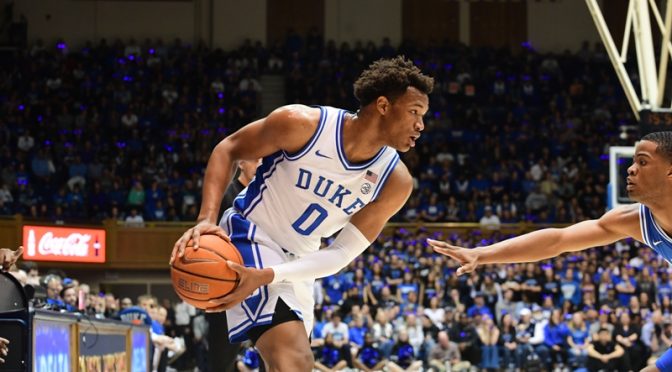 The Duke Blue Devils open their 2019-20 season against the Kansas Jayhawks in just a few hours. No matter the result, it would be wise not to read too much into the outcome.

While Duke would certainly like to come away 1-0 after the dust clears, they may well be outmatched this early in the season. The reason being that Kansas has experience while Duke is still figuring out their rotation.

Duke has not had preseason separation from some players on the roster which means, that yes, Duke will play more bodies than fans are accustomed to seeing.

It will not take long to become obvious that there are no alpha dogs like Zion Williamson and RJ Barrett on the team. It's not a stretch to imagine five to six different players leading the team in scoring on a given night this season.

The Blue Devils will be tested in the paint where Kansas is large and loaded. The team will not face a better frontcourt, so all eyes will be on how the team rebounds.

Unlike the exhibition games where Duke could easily get the ball after missed shots, this game will put game pressure on shooters to be accurate and wise with their shot selection for rebounds will be earned.

What we will see is some ball pressure where Duke will hope to disrupt the Jayhawks from getting the ball in the paint to their big men.

In short, the Duke freshman while good, will see top-level college basketball in their first outing. The test will be a good barometer for Mike Krzyzewski and his staff to teach via film study as the season moves forward.

The one way Duke can come away with an early-season resume-building win is to play scrappy. The Kansas guards have a lot of size as does their team, so using quickness to your advantage and pushing the ball if you can rebound will help.

There are so many unknown factors that will come into play. Can Duke knock down free throws? Will they be able to hit some three-pointers with the extended length of the stripe that comes into play this season?

The questions are plentiful and also include how will this team handle adversity and many other aspects of the game. But no matter the result make no mistake that the Duke Basketball finished product come March will look nothing like what we may see this evening.

It was surprising to me to see that Duke is the slight favorite in this game. Kansas has fewer questions than most of the nation's top-ranked teams and they have solid depth.

When you come to Duke, you have to expect the four letters on your chest creating huge expectations. And that is when the pressure begins, for not long from now, the whole nation will be watching two college basketball heavyweights to battle to start the season at the Champions Classic.

The questions of what may happen are plentiful, but some answers will not come right away. That is a reason to put a win or loss in proper perspective for titles are not won in early November.