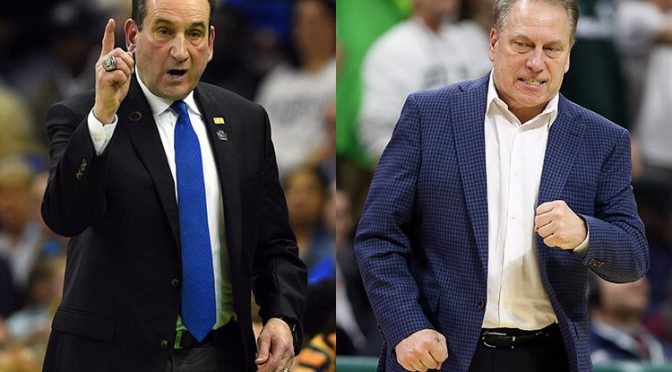 As the Duke team entered the court at Breslin Center in East Lansing, Michigan it took little time in noticing the noise and the white out the Michigan State fans had prepared for them. Little did Spartans know, a youthful team with a spattering of veterans would in time silence them.

The Blue Devils entered the game a 6.5 underdog and very few people were showing confidence in a Duke win with this being the first true road game for the team.

After trading some opening blows, Duke had established a tough mindset on the defensive side of the ball. In fact, they knocked the home team back with their physical go right at you play.

On a night when many were frothing at the mouth to question Duke after another loss, the Blue Devils implemented their will and came away with a double-digit victory.

The beauty of all this for the Duke staff and their fanbase is that there were many contributors. On a night when starter Cassius Stanley was sidelined, the team showed up and played together.

Tre Jones had a marquee matchup with Cassius Winston and he outplayed his older opponent in a big way. And he did so in front of his brother, Tyus, and mom, Debbie.

Jones would tally 20 points to go with 11 assists and 3 steals while holding Winston 12 points and 7 assists. In short, he returned north and showed out on national television.

The other side of the two-headed monster for Duke as Vernon Carey Jr. He dominated the older Xavier Tillman on his way to another double-double of 26 points, 11 rebounds, and 3 rejected shots.

But as I said, Duke got more from its team. Matthew Hurt hit some big early buckets including two three-pointers while quietly collecting 3 blocked shots.

Joey Baker came off the bench for the second game in a row to aid on the scoring front where he had 11 points on 5-6 shooting in 17 minutes of play. Baker is starting to carve out a role with his offensive prowess.

And then there was Javin DeLaurier who added hustle and his best game since the loss to Michigan State a year ago. He had 10 points on perfect 5-5 shooting to go with 6 rebounds, 2 steals and 1 block. It was a game he can build on.

It was also clear that the staff had the team well prepared to go into a hostile environment in East Lansing where the team would silence the sold-out crowd and send them to the exits early.

Duke, which dropped to 10th in the latest A.P. poll in a year when there is a terrific balance, showed that ranking is too low, especially considering Kansas, a team they beat, is ranked #2.

In short, it was another Duke program win and there was some sweet revenge from a season ago when the Spartans upset another beloved Duke team. And the fact that Duke is 19-2 all time in the ACC/Big Ten Challenge is nothing short of a phenomenal accomplishment.

I had called Javin DeLaurier the X-factor in yesterday's update and he was. I also pointed to the fact that Duke would have a quick and brutal turnaround before facing a Virginia Tech team in Blacksburg.

You are only as good as your last game and Krzyzewski and company were sure to limit the celebration of a great win to last night. It is a shame that scheduling does not allow Duke to enjoy this win.

And this questionable scheduling will happen again later in the season when Duke travels to UNC and then less than two days take on Florida State in Cameron. It is mind-boggling that they will have so little time to prepare for another ACC game after the most marquee college basketball matchup in the land. And no, the Tar Heels do not have the same quick turnaround.

Anyhow, more on that later, but for now, Duke is back in the nation's spotlight after a convincing win over the Spartans. They played good defense, came together more as a team and with a win at Virginia Tech will ascend in the rankings again.