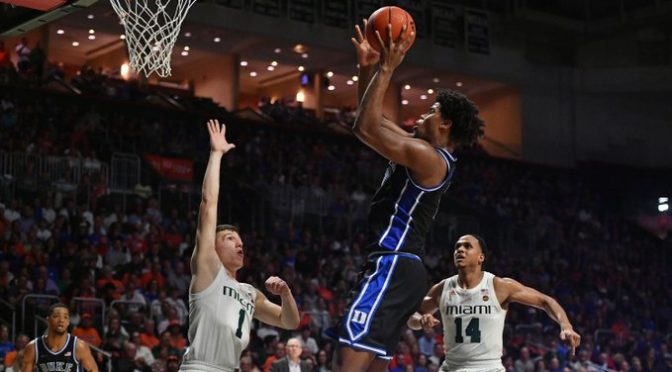 The #2 Duke Blue Devils defeated the Miami Hurricanes 95-62 to push their ACC record to 3-0 and 13-1 overall for the season.

Duke came out scorching hot in the first half shooting 62% from the field on their way to a 50-36 edge at the half.

The Blue Devils wore down the Hurricanes with their depth and extended their lead in the second half behind Vernon Carey Jr's 24 points and 9 rebounds. Carey played in front of his hometown crowd in the contest and he did not disappoint his supporters.

Cassius Stanley was a major contributor as well for Duke with 20 points and 5 rebounds.

The Blue Devils played eleven players in the contest and all of them scored. Duke shot a solid 59% from the field and the defense held Miami to just 6 total assists while they garnered 23 of their own.

"Our guys just played really hard and they shared the ball. With 23 assists, it was kind of nice to see," said Duke Head Coach Mike Krzyzewski.

Matthew Hurt had another solid game with a stat line of 13 points, 6 rebounds, 4 assists, 3 steals, and a blocked shot.

Duke scored more points in the paint with 64 than Miami did in the game with 62 total points.

The Blue Devils showed off improvement while maintaining poise throughout the game. And with the impressive win, you can be sure that people will take notice again which could lead to a few more number one votes in this coming week's poll release.

Duke will travel to Atlanta where they'll take on the Georgia Tech Yellow Jackets this Wednesday at 9:00 on the ACC Network. Duke is 10-0 since the 2010-11 season against the Yellow Jackets which comes off an upset win over North Carolina in Chapel Hill.