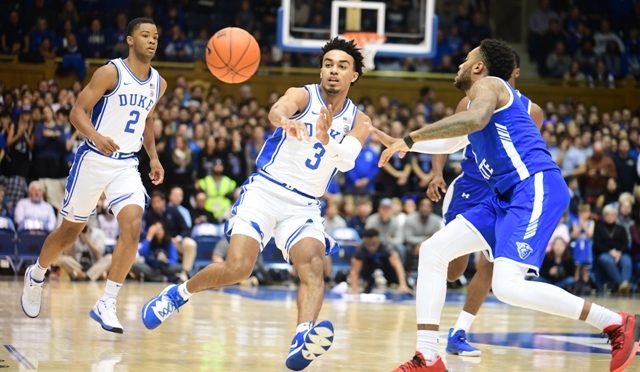 On how the team benefitted from being in a close game on Wednesday night:

“Definitely just getting used to how road games are in the ACC usually. Just how the atmosphere was – crazy atmosphere – but then just going through a battle like that, coming down to the last few possessions and then having to just lock in and make the right plays to get us the win.”

On what has been the biggest improvement in Vernon Carey Jr.’s game:

“Probably just how hungry he is to continue to post up inside and continue to dominate inside. I know a lot of people questioned how he was for a center [with his] back to the basket [and] things like that coming into college. Just transitioning from floating around the arc and things like that to being back to the basket, pretty much unstoppable unless you have to double-team him.”

On what kind of challenges Wake Forest presents:

“I think we just got to take them out of their transition to start off with. They like to get out in transition and get easy buckets that way, but controlling their guards and perimeter [will be a key].”

On what some of the things are that Javin DeLaurier has been able to teach Carey:

“I think just continuing to play hard every single possession. With Javin being able to come in for him and give him minutes, Javin comes in and is always playing hard, always trying to be in the right spots, talking to guys, so just his leadership for sure.”

On if this team’s success is flying under the radar after the media attention that the team received last season:

“I would say compared to last year, for sure, it’s different. I think that feeling of being a top team still is there, but the attention that we got last year is something that’s never been there on any team, so definitely – you can’t compare any year to last year as far as the attention goes.”