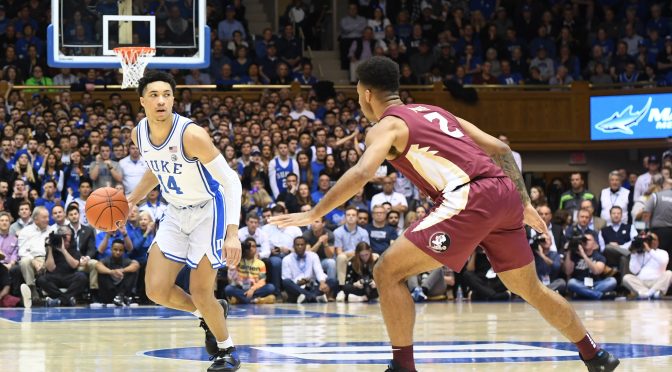 The 21-3 Duke Blue Devils seem to be flying under the medias radar despite a six-game winning streak. Perhaps it is the fact that the seventh-ranked Blue Devils have not risen in the polls going on four weeks. Whatever the case, Duke is coming off stellar wins over North Carolina and Florida State which capped off a grand week.

The Blue Devils got some much-needed rest after a barrage of games but now they must put the high from that behind them for new challenges. The first of those will come this Saturday at 4:00 in Cameron Indoor Stadium against Notre Dame.

While it is true that Duke will be favored over the Irish what cannot be measured is the added desire teams left on the schedule have trying to collect an NCAA tournament bid. And Duke must find a way to match their oppositions hunger or upsets will occur.

The staff never looks ahead but a hungry N.C. State team is on the horizon as well. The Blue Devils, which play the Pack twice in twelve days travel to Raleigh next week for a game with the dreaded 9:00 tip-off time. The Wolfpack like the Irish will be hungry and looking for a marquee win and they always play Duke tough.

Duke will be the hunted as they embark on the challenge of closing the regular season on a high note. The Blue Devils who are currently in sole possession of 2nd place in the ACC have just seven games left on their pre-tournament schedule.

Of the games left, only Wake Forest and North Carolina are more or less out of contention for an NCAA bid. But the Demon Deacons are a road game and they just walloped North Carolina at home. Duke will also travel to Virginia and the defending national champs will be a challenge.

Duke will close out the season with two home games versus Triangle area rivals N.C. State and North Carolina. And we all know, anything can happen in a rivalry game. But the game with the Tar Heels will be senior-day for Jack White, Javin DeLaurier and Justin Robinson and I think that'll be a difference-maker.