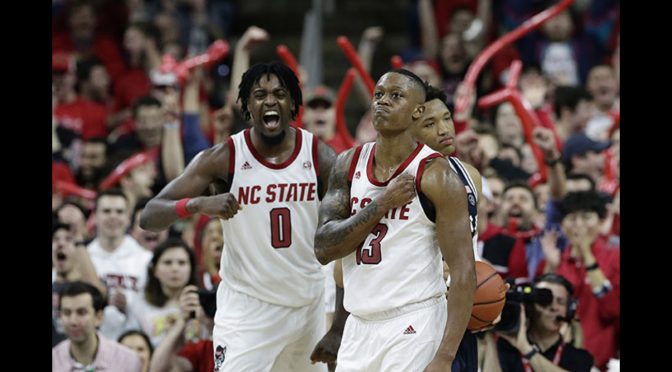 Some mysteries live on with no logical explanation and one of those is how N.C. State Wolfpack saves their best effort for Duke each season. Last night was no different where Duke got throttled in Raleigh in the worst loss to an unranked team in Duke coach Mike Krzyzewski's long career.

A team coming off a loss to Boston College and were roasted by their rival North Carolina in the same PNC Arena just gets up for Duke. Part of that was from desperation or the need for a marquee win with tournament bids around he corner.

The Wolfpack has the talent and they have more or less underachieved this season. I mean, they stormed the court after beating Duke, for gosh sakes. And honestly, this team has the talent to not be going that route had they played better in certain games.

I could see his upset coming miles away. If you do not believe me look at the title of the previous article posted here. Duke lost the game when they went down 12-2 early in the game. The one thing they could ill afford was a slow start against a hungry team and that allowed for the Pack to dictate the pace or the way the game was played.

But Duke made sure this loss was going to happen with horrid free-throw shooting, a paltry six assists and a rim which seemed the size of those we see with games of chance at your local State Fair.

In short, they could do little right and they seemed a step slow both mentally and physically. Coming off a seven game winning streak seemingly had this team too relaxed or not ready to compete at the level necessary to win. And Duke was not prepared to match their opponent in any way on this evening.

But this is a single game. And Duke needs to forget what they did wrong and get back to playing their version of basketball. This was the worst defeat of the season where the Blue Devils looked like freshmen playing against men, but if they allow this to carry over it will not be in their interest.

Yes, it is true that the last two Duke national championship teams have lost by double digits in Raleigh to the Wolfpack. And that is but one why I was concerned last evening.

Duke needs to wipe this game from their memory but only after learning lessons in that if you are not prepared to play, you will be sent home quickly in March.

The Blue Devils have been playing good basketball until the blowout, but the main lesson here is that this team is not a juggernaut and they need to be sharp no matter the opponent.

This team lost a long time nonconference winning streak in Cameron and they now have the worst defeat against a non-ranked team. They also stumbled against a .500 Clemson team.

But this is also a team which is still tied atop the ACC standings despite the recent loss. And this is a team with their marquee wins in the bag. What Duke has to do now is get back on track and do so quickly with another guard-heavy team in Virginia Tech which visits Cameron Indoor Stadium on Saturday.

If Duke is to secure a top-two seed in the NCAA Tournament, they can afford maybe one more stumble in the regular season at best. And this is where I refer you back to another article where I stated how hungry the remaining teams on the schedule will be.

Last night was awful for the team and fanbase. The only cure is to show it was an aberration and another learning experience before the tournament begins.