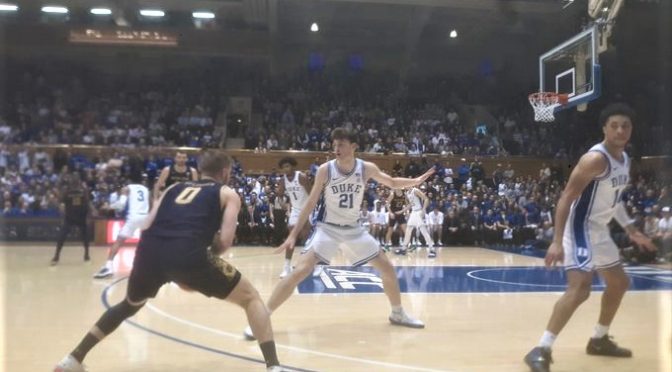 The Duke Blue Devils defeated the Notre Dame 94-60 in Cameron Indoor Stadium on Saturday afternoon. This marked the seventh straight win for the Blue Devils pushing their ACC record to 12-2 on the season and 22-3 overall. Duke moves into sole possession of first place in the ACC with the win coupled with Louisville losing at Clemson.

It was a feel-good win for Duke on a day when everything went right. The Blue Devils held Irish guard Rex Pfluger scoreless in the game and they had a solid team defensive effort.

The Blue Devils were deadly from the three point stripe in the game where they connected on 10 of 22 attempts. They also shot 52% from the field and outscored the Irish 52-32 in the paint,

Duke was led in scoring by Vernon Carey's 21 points. When he bared down on John Mooney, he generally had his way. His play eaqrned praise from Duke coach Mike Krzyzewski in the post game press conference.

While Krzyzewski lauded the effort on many players on this day, he singled out Tre Jones again saying the way he leads his team has led to the recent success. Jones ended the contest with 19 points and 6 assists.

Ten Blue Devils scored in the contest and Duke scored 24 points with their fast break. Matthew Hurt and Alex O'Connell added 12 points each for Duke and he bench outscored the Irish 31-14 in the contest.

Duke was without the services of Cassius Stanley who got poked in the eye by a basketball manager during the shott around before the game started,

Several former players returned to Duke over the NBA All Star game weekend. Among the players in attendance were Tyus Jones, Quinn Cook and Zion Williamson.

All three of the former players and Gene Banks were in the Duke locker room when it opened for the media. Krzyzewski said it was alway7s nice that his former players wanted to return to Duke. He praised Williamson for doing so after playing in the NBA Rising Stars game last night.

If Duke can build on the win tonight, they will be in good shape heading into the stretch run. The Blue Devils will likely inch up on the polls this week with the stellar win over a tournament hungry team.

Next up - Duke will take on N.C. State next this coming Wednesday night in Raleigh, The game tip just after 9:00 eastern time and telecast on ESPN.