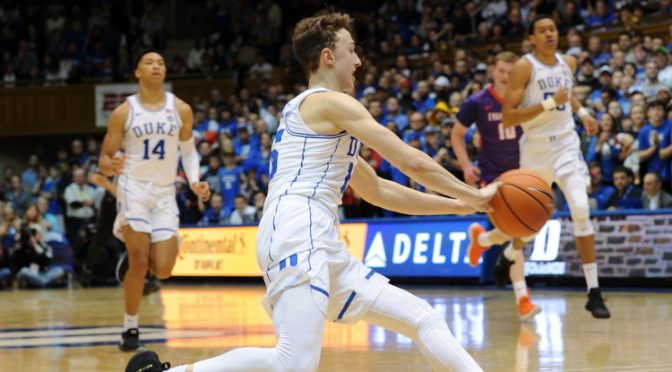 Duke shooting guard Alex O'Connell has entered his name into the NCAA Transfer Portal. O'Connell has one season of eligibility left and will likely seek a place where he will get more playing time.

O'Connell, Georgia native averaged 13.3 minutes per contest this season averaging 5.2 PPG. 2.2 RPG during his junior season at Duke. He started six games for the Blue Devils.

"These past three years have been filled with nothing but blessings and love from Duke," stated O'Connell on his decision. He continued, "However, I will be opening my recruitment and exploring other options. I want to thank all of the Duke fans and crazies as well as the Duke coaches and staff."

Blue Devil Nation members were told of some pending moves and we are now seeing the offseason develop quickly.

The Blue Devils also lost the services of Tre Jones who elected to put his name in the NBA Draft. Vernon Carey Jr. is expected by many to follow Jones and Cassius Stanley is analyzing his situation.

Duke also loses three seniors in Javin DeLaurier, Jack White and Justin Robinson. If the numbers remain as is, that is six roster players departing.

The Blue Devils have a six-man recruiting class coming in and they're kicking the wheels on possible incoming transfers. For more on recruiting, join Blue Devil Nation Premium.

O'Connell showed flashes of a much-improved game this season. He was physical with the ball and threw down a career-high nine dunks. The Blue Devil Nation wish Alex all the best and we'll be keeping an eye on his career.