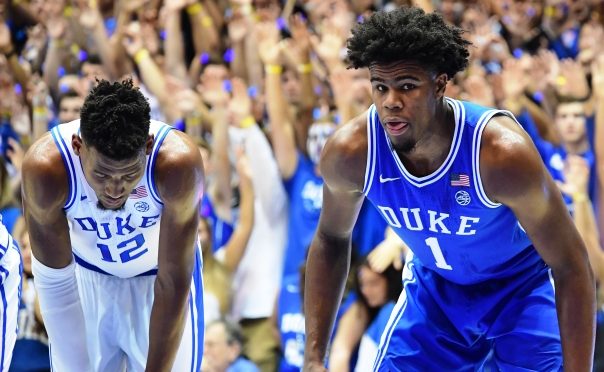 DURHAM, N.C. – Duke freshman Vernon Carey Jr., has announced that he will enter his name in the 2020 NBA Draft.

The National Freshman of the Year selection by both the USBWA and NABC, a consensus second-team All-American, the ACC Freshman of the Year and a first-team All-ACC pick, Carey finished his impressive rookie campaign as the only player ranked in the ACC's top 10 in scoring (third, 17.8), rebounding (fourth, 8.8), field goal percentage (first, .577) and blocked shots (sixth, 1.6).

"We were honored to have Vernon and his family in our program this season," said head coach Mike Krzyzewski. "He had an incredible year, being named one of our team's Most Valuable Players, the National Freshman of the Year and a consensus All-American. I'm am so proud to have had the opportunity to coach such a tremendous young man. He came every day looking to get better, and I know the best is yet to come for him. I want to congratulate Vernon and his family on this decision and wish him nothing but the best as he begins what will be a special NBA career."

The Miami, Fla., native posted 15 double-doubles on the season, which ranked second among NCAA freshmen and second in the ACC. Ten of his double-doubles were 20-10 performances, while 14 came as 15-10 games. Carey was ranked second nationally among freshmen in scoring, third in field goal percentage and fourth in rebounds. He was named the Most Valuable Player of the 2K Empire Classic after scoring 51 points and pulling down 22 rebounds in a pair of wins over Cal and Georgetown at Madison Square Garden.

"I am very thankful for the opportunities I've had my whole life to put on a basketball jersey and play at the highest level every step of the way," said Carey. "I've been able to do that because of the amazing support of my family, coaches and teammates. I'm lucky to have parents who have always encouraged me to dream big, and motivated me to compete with and challenge the best. We did that at Duke every day. I loved competing with my teammates on the biggest stage in college basketball. We created memories that I will cherish forever. I grew as a player and person, and feel prepared to take that next step. After an incredible season, I am excited to enter the 2020 NBA Draft. I will always appreciate everyone at Duke who invested their time and energy to make me better -- Coach K and our coaches, our entire support staff, our managers, the Cameron Crazies and so many others across campus. Duke is a special place and you already know I will be back soon to catch a game and support my brothers."

Carey, who started 30 of Duke's 31 games in the abbreviated season, attempted more free throws (218) than any freshman in college basketball. His 28.7 points per 40 minutes were topped by only Marquette's Markus Howard and Iowa's Luka Garza among major conference players.

Carey helped lead the Blue Devils to a 25-6 overall record and 15-5 mark in the ACC.