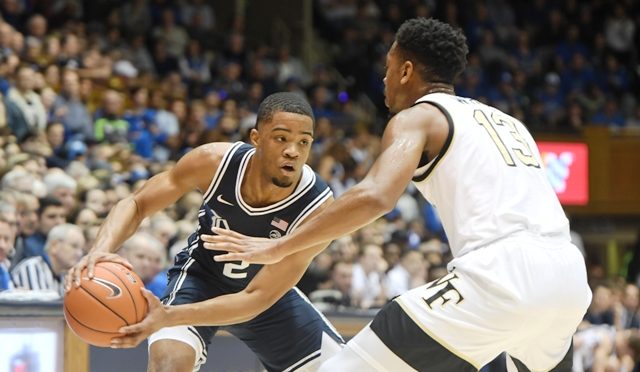 The selections of ACC Freshman of the Year Carey Jr., by the Charlotte Hornets (32nd pick), ACC Player of the Year Jones by the San Antonio Spurs (41st) and ACC All-Freshman Stanley by the Indiana Pacers (54th), Duke now boasts 100 all-time draft picks, including 67 coming under head coach Mike Krzyzewski. The Jones’ selection by the Spurs with the 41st pick comes 20 years after Chris Carrawell, who is a Duke assistant coach, was also drafted by the Spurs with the 41st pick (2000). Both Jones and Carrawell were ACC Player of the Year that year.

The Blue Devils joined Kentucky and Arizona as the only college programs with three players selected during the 2020 NBA Draft.

Duke has had at least one player selected in 33 of the 40 drafts under Krzyzewski, including at least one in 10 consecutive drafts. In that span since 2011, 27 Blue Devils have been drafted. Coach K's 41 first-round selections remain a Draft record.

The 2020 NBA Draft was originally scheduled for June in New York City, but was delayed by the COVID-19 pandemic and held virtually in the ESPN studios in Bristol, Conn.

• Duke has produced a total of 100 NBA Draft picks all-time.

• Head coach Mike Krzyzewski has coached a total of 67 NBA Draft picks since taking over the Duke program in 1980-81.

• The Blue Devils have had at least one player selected in 21 of the last 23 NBA Drafts.

• Duke has had at least one player taken in 33 of the 40 NBA Drafts in the Coach K era.

• Duke's streak of producing a top-3 pick in the NBA Draft was ended after six years. It stands as the longest streak by a college program in the history of the draft.

• Stanley becomes the first Blue Devil to be taken No. 54 overall.