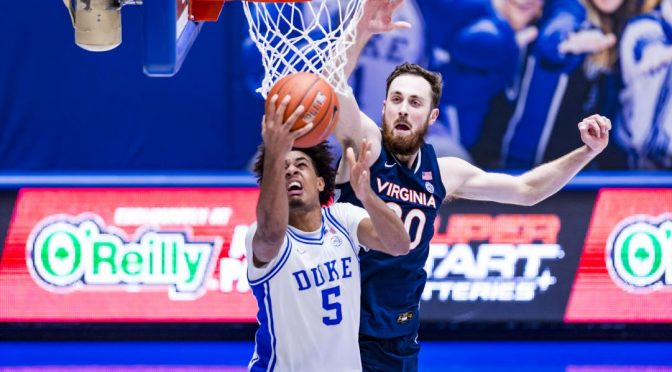 In the past, the Duke victory over #7 Virginia may have been just another win. You may not have seen the extra perky joy we see on social media this morning from the fanbase despite this being the 100th win for Mike Krzyzewski in that success is commonplace for the program.

But for this Duke team, the win over Virginia represented a huge step forward. It was the first marquee win over a ranked team after they struggled with chemistry for much of the early season.

Duke now has momentum, riding a three-game winning streak into a quick turnaround game with Syracuse tomorrow evening. We all know the team will have to put this game to bed no later than noon today, but recognizing last evenings achievements is something we can do,

Firstly, the team played a full forty-minute game. And that took their best concentration of the season where each possession was both critical and valued. But the one thing which really stood out was the team's chemistry.

Duke had a lot of players step up in the win and they did so at different times. Matthew Hurt set the tone with his three-point shooting and offensive prowess on his way to a game-high 22 points.

While Wendell Moore Jr. was not filling it up on the scoring end via points, he created a bunch of them via a team-high 7 assists. And how about Jordan Goldwire? He had 4 key steals, 4 assists to go with 4 points, and 3 rebounds.

The aforementioned three players or the veterans on the team all contributed mightily to the win, but the growth also came in the way of the freshman class, save Mark Williams.

There is no need to worry about Williams for matchups dictated how Duke had to guard Virginia. In short, he will be back in the groove sooner rather than later.

D.J. Steward also struggled a bit with getting clean looks, but he made a dagger three-pointer and was not afraid to take a big shot in crunch time. Virginia native Henry Coleman also gave the Blue Devils a great five minutes of play where he contributed 4 points, 2 rebounds, and a blocked shot.

Another native of the Commonwealth of Virginia,. Jeremy Roach had one of his better games. He made some key buckets when the Blue Devils needed them most and he combined with Goldwire for 7 of the Blue Devils 16 total team assists.

But the freshman of the night was Jaemyn Brakefield. No player has stepped up more for Duke since losing Jalen Johnson to the NBA than the guy who plays with a big heart.

Brakefield gave Duke a spark on more than one occasion and his play was infectious. He tallied 11 points, 5 rebounds, and 4 blocked shots.

The Blue Devils won as much with their defense as anything else but they kept the Cavaliers off the free-throw stripe as well. Considering they connected on 8 of 10 when there, the aforementioned played a large role in the victory and showed that Duke played with discipline.

The one thing which stood out to me was when Virginia came out really physical and knocked Duke back at the start of the second half. Young teams generally wilt when a more experienced team starts to will their way to erasing a three-point halftime lead while building one of their own.

But Duke gathered themselves and commenced to trade punches until they came away with a stellar one-point win. And in doing so, they showed growth as a team.

As they say, you are only as good as your next game. And Duke must now show discipline off the court in getting rested and prepared for a quick turnaround Monday game against Jom Boeheim and Syracuse. And when these two teams get together, you know we are in for another entertaining game.