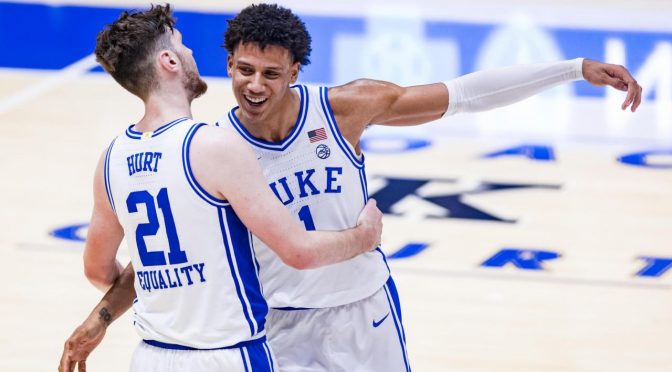 DURHAM, N.C. – Duke men’s basketball forward Jalen Johnson announced he will forgo the remainder of his freshman season to declare for the 2021 NBA Draft.

Johnson, who had played in 13 games with eight starts, was third on the team in scoring (11.2 ppg) and second in rebounding (6.1 rpg). He opened his career with a 19-point, 19-rebound effort versus Coppin State on 8-of-8 shooting, which set a Duke freshman record for most points in a game on 100-percent shooting. After missing three games with a foot injury, he returned with another outstanding game at Pitt by scoring 24 points, grabbing 15 boards, with seven assists, no turnovers and four blocked shots. The Milwaukee, Wis., native was twice named ACC Freshman of the Week, and he was the ACC’s second-leading freshman scorer to teammate DJ Steward.

“I appreciate everything about my time at Duke,” said Johnson. “Coach K, my teammates and the program have been nothing but supportive throughout this season, especially during the rehab of my foot injury. My family, Coach and I have made the decision that I should not play the remainder of this season so I can be 100 percent healthy in preparation for the NBA Draft. This was not easy but we feel it’s best for my future. I have nothing but love for the Brotherhood and thank my teammates and everyone associated with the program. Duke will always have a special place in my heart and will always be a part of me.”

“While we are encouraged by what we are seeing medically, for Jalen’s future, we believe this decision is in his best interest,” said head coach Mike Krzyzewski. “We are ultimately careful with every one of our players and will continue to support Jalen as he progresses toward his goal of playing professional basketball. He deserves to be fully healthy for the upcoming NBA Draft.”

The Blue Devils have had at least one player selected in 33 of 40 drafts under Krzyzewski. Coach K has tutored a total of 67 draft picks since taking over the Duke program, including a Draft-record 41 first-round selections.