Starting off with AAU Basketball and Las Vegas, Kenny Boynton and Brandon Knight have scored 33/26, 21/24, and 26/19, respectively over the past three days.  The two have combined to make 17 three point shots.  Jody Demling has an extensive update from Las Vegas posted on his blog at the Louisville Courier-Journal.

The Las Vegas Review Journal has written a positive article on the ability of lesser known athletes to achieve exposure via the AAU circuit.  Adam Zagoria and Dick Weiss also have updates on their blogs.

Turning to Duke football and Desmond Scott on his decision to play for Duke University: "I wanted to play in my backyard."  WRAL.com has more here.

When Kobe Bryant mentions the "joy of the game," you get an idea of what Coach K has done to make sure the players are enjoying themselves in preparation for the Olympics.  Most of the players remember little of the last time the USA won Gold.

In this blurb, the author says Team USA has that special something that is missing from most NBA teams.   There is some worry about the overall team health.  And here is CNNSI's Chris Ballard on long range planning for the USA Basketball program.

Kenny Boynton has no shortage of confidence judging from his comments in this link.

With kickoff to football season just over a month away, Coach Cutcliffe caught the attention of coaches on Wednesday's Operation Football.  Here is ESPN's Heather Dinich on Duke's "Catch 22."  Richmond edged out James Madison in the pre season polls which is a departure from the pre season magazines which all have JMU on top.  TSN picks them #2 in the nation, Lindy's #3 and Phil Steele has them number one.

Here is your daily platter of links from Las Vegas where the nation's top basketball prospects are gathered.   Let's start with the local paper the Las Vegas Journal Live.  Then there is this link at NBADraft.net followed by one of the better blogs around in Zags Blog.

Let's not forget Jeff Goodman of Fox and then there is the LATimes-Thompson says tournaments not so good  for prospect's inflated egos.   Lastly, Jody Demling of the Louisville Courier has as a good report up. 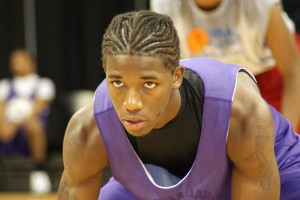 Kenny Boynton scored 26 second half points leading Team Breakdown to an 85-73 win during the opening day of the Reebok tournament in Las Vegas.

Boynton erupted after struggling with his shot in the first half where his team once trailed by 13 points.  Several of the nation's top coaches were on hand to see his performance.

Wall led his team to a 87-80 win over Worldwide Orange, scoring 30 points in the victory. Here is TSN on the Breakdown game.

Before I get into this interview, let me make this clear.  Kenny Boynton is the man for Duke.  If something goes south they might look at John Wall and he is still open to Duke coming in.  He is a very talented true speedy PG who slashes about the court and makes his teammates better with his abilty to get them the ball.  During this interview, I had two cameras on me for they were filming for a documentary on the process surrounding Wall.  You never know what might happen in recruiting.

[private]The last time I talked to you was in Durham during the TOC, has anything changed since then?

Not really.  I am still wide open and trying to get schools to come in.  The schools that are coming at me the hardest are Memphis and Oklahoma State, Oklahoma, Oregon, Baylor, Kansas, Kentucky and NC State so far.  Those are the ones coming the hardest but I think other schools are going to come around.

The last time I talked with your coach he said you were not near the point where you would shut down the process.  Does that still hold true?

Yes, that's still true, but after Vegas I'm going to narrow my list down going into my senior year.  You've got to get your five ... get your business set up.

So, is their anyone that would make the top five for sure ... right now ... anyone guaranteed a visit?

No, not yet.  There's a couple of schools getting close to it.

You just scored thirty points in your last game, but your team came up short.  Did you miss Ryan Kelly?

Yeah, Kelly's a big part.  He gives us a presence in the paint and as you could see we lacked that.  We weren't playing defense and getting back.  We just didn't make our shots but we played hard.

Is the AAU season taking a toll on you?

Yeah, it gets kind of tough, but you go back home.  In between you just ice your knees and relax.  We'll go to Vegas (Reebok) next and then I can rest for a little while before preparing for my senior year.

"I think he has an idea of what he wants.  I want him to be comfortable with what he does.  He has a lot of talent and I encourage him to get better and stronger.  I mean, now that people knows who he is some of the flaws he could once get away with he will now have to develop.  Now, everyone is going to start to push him and pull him and try to get him to go against his people and get him to feel like no one can tell him anything.  This world can eat him up.  I've seen it happen to too many players, myself included. (played at Clemson).  I don't want that to be the case with him."

So, will your coach be a big part of the process?

He's like a bigger brother to me.  I don't have one like that so he fills in.  With DC ... we can go out and stuff and just have a good time.  He's trying to develop me through this process because he went through it at Clemson.  So, when I make my decision, I am going to ask him or talk to him about it.

Who are some of the toughest guys you've gone against on the circuit?

What does John Wall need to work on for his game to get better?

I've got to get stronger, work on my jump shot, defense, lateral movement ... there's a lot of stuff I can work on.  You just can't stop when you get on top.  I have some God given ability but I need to keep working because everybody else will.

What keeps you motivated?

Playing for my Dad.  He died when I was ten years old.  My Mom, my sister .. just want to get them to a better place.

How long have you know your Coach?

I knew him from the AAU circuit when I was about 14, but he really started coming in in the last two years talking to me.  Now he's my AAU coach and gives me advice.

Of the ACC schools, you mentioned NC State.  With you playing highs school ball down the road, do they push hard?

You've been to some of there games too, right?

Yes, I have been to a couple of Duke games and a Carolina game.

How did you like the atmosphere at those schools?

It's a good atmosphere.. crazy, people are going crazy everywhere at Duke and UNC ... all those fans.

Did Duke contact you at one time or are they in touch?

Coach Dawkins and Coach K came to a couple of my games.  They said they wanted to start recruiting me and stuff like that.  I took their advice and came to the TOC and was able to play a game in Cameron.

Have they been in touch since that time?

Uhhh .. I haven't talked to them since Coach Dawkins got the job at Stanford.

No, haven't heard from them.

Thanks for your time and I wish you luck in choosing the right school.
[/private]