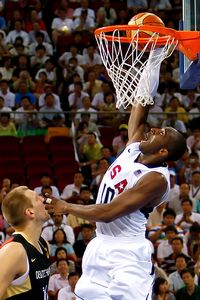 Dwight Howard put on a show missing a single shot on his way to scoring a team high 22 points (9 of 10 FG's) while grabbing 10 rebounds.   Twelve American players played double figure minutes as the Coach K led Team USA demolished Germany 105-59.  The romp was from start to finish, starting with a Anthony lay up and ending with Paul assisting Redd for slam dunk.  James chipped in with 18, Bryant 14 and Wade and Paul had 10 points apiece.  Team USA is now 5-0 and continues their quest to bring the Gold home.

Next up - Australia on Wednesday[/private]

[private]The United States men's basketball team made a statement Saturday night in Beijing by dismantling Spain 119 - 82 in the fourth game of pool play. Eight American players scored double digit points in the victory. For the first time since arriving in China, the 3-point shots started falling as the USA made 12 of 25 attempts from behind the arc to compliment their 32 - 0 advantage in fast break points. Team USA's signature stifling defense created 28 turnovers in this game.

Coach Krzyzewski commented: "I thought they missed some open shots tonight. We made our open shots; that was a big factor in the game. We know it's a pool game. We know the importance of winning pool games, but the most important games are next week."

Team USA concludes pool play against Germany on Monday evening then moves on to the Quarterfinals of Medal Play. 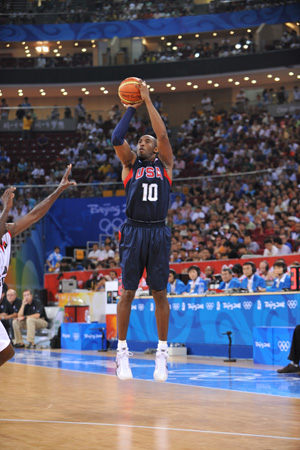 Team USA cruised to an easy victory to go 2-0 in pool play by defeating Angola 97-76.  Dwyane Wade led his team in scoring with 19 points.  Team USA struggled from the free throw stripe and hit just 23% of it's threes.  In the end, there was simply too much talent for Angola to overcome.  Team USA will need to play a bit tighter against their next foe Greece, a team that defeated them in the semi finals of the World Championships a mere two years ago.

Coach K on the upcoming game with Greece - Our team knows a lot about them.  I’m very close friends the coach.  He’s actually come to Duke and spent time with me.  One of the assistant coaches, Nick, has spent the whole year with us.  We have great respect for them.  They play as hard as anybody we can play against, especially on the defensive end of the court.  Their offensive schemes are well conceived.  I think their team starts with their guards.  They really have three point guards and all three of them can be in at the same time.

[private]Team USA began it's quest for the Gold Medal today by choking China with it's defense on there way to a 101-70 win.  Of course, all Duke fans are paying more than a little attention to the games and we will continue to cover the games. 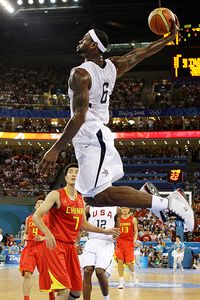 Coach K- It was an honor for us to be in this game.  I thought the Chinese team and our team both played extremely hard.  I was proud of our effort.  I thought that the attention we gave Yao early, he made some really good plays to get his teammates involved.  And they hit 3’s.  More than half their points in the first half were from 3’s.  We were like 1-for-12 … I think we ended up 1-for-15 before we starting hitting some 3’s.  I was proud of our guys.  I would hope that their coach would be proud of their kids.  I thought both teams really responded at a high level to the magnitude of this game. Elliot Williams helped his E-Net team to it's third victory scoring 19 points in the process.  Williams had a fabulous first half where he at times seemed to be posturing for a highlight reel.  There was one sequence where he showed of his athletic ability.  He slashed to the basket finishing with an authoritative dunk which brought ooh's and ahh's from the crowd.  He then created a break after a turnover as he slithered through the defense only to be found with the pass where he finished by using the basket to his advantage for a reverse lay in.  IOW, he played a huge role for his team tonight and shows he is not afraid to play against anybody at this level.

He didn't do it all by himself though.  He was aided by Brandon Costner whose presence has helped E-Net win consecutive games.  Costner was strong in the paint, an area that had plagued his team in early losses.  E-Net was down by 10 points early, but stormed back to go up by 11 and hung on for a victory over.  Former Pack player Anthony Grundy led all scorers and has showed significant improvement since his days in Raleigh.

Three Dukies took to the court for the RDU Barnstormers in a game that would prove a defensive struggle.  The more talented Barnstomrers eventually won 48-47.  This team is guard heavy and guard dominated.  In fact, there is way too much dribbling and forced shots where they try to make the big play instead of finding the open man.  Sometimes the efficient plays bode better for the team than forcing the issue.

For the first time, SIngler was able to get a breather, alternating with Czyz.  I am not too sure how effective this was for the four guard lineup hurt in my humble opinion.  Singler struggled a bit on offense, possibly because last seasons ACC Rookie of the Year got five whole shots, making a deuce and a three.  He got to the line often, going 6 of 10 for a total of 12 points.  What many missed is that he is willing to do the dirty work and little things which equate to 5 blocked shots and 8 rebounds.

Low and behold, Olek Czyz didn't get a dunk tonight.  That's because he was used as a hacking dummy in an effort to keep the crowd favorite grounded.  Olek was 10 for 16 from the free throw stripe and that was all of his points.  He added 3 boards to go with 2 steals.

Nolan Smith is saddled on a team with many guards and it keeps the ball out of the hands of the talented player.  Nolan tossed in 15 points going 4 of 6 from the field and 3 of 3 from the line.  You would think with that kind of efficiency his teammates might get the rock in his hands more often.  He was smooth in his movement and his first half performance kept his team in the game.  Smith had 3 steals and a couple of assists as his team went to 6-3 which is still good enough for second place.

Lance Thomas was the man tonight and had to be for there was no Jerry Stackhouse, Green nor Davis for the Regulators.  After two consecutive dunks, LT helped his team to an early 29-12 lead.  During one sequence, LT dunked, rushed back to play the passing lanes, made the steal, dished to a teammate to start the break and finished it off with a reverse dunk.  Lance is a hustle guy who goes 100%  while he  in the game.  The wheels came off for the Regulators in the second half as they went down to a one point defeat, 57-56 blowing a 20 point lead.  Thomas had 17 points and a bevy of boards in the Regulators only loss thus far.  My report from the scorers table says LT was hacked hard as time ran out, but no whistle was heard.  Hopefully, a bit more consistency will ensue with the playoffs looming.

I didn't catch the nightcap, but got a call from the statistician who told me Gerald Henderson has 12 points with his team winning a 54-51 game over   There was no doubt that the overall play was hurt by physical foul-fests and forced shots on this evening.  Still, that's to be expected in basketball where o n a given night many things can happen.

The tournament will continue on Tuesday night with the final regular games and they will be hard fought in that they are jockeying for play off position.  They will then start the playoffs where the team are one and done.  So, get out there and support your favorite players!  The crowds have been consistent and again, there is an accommodating atmosphere at McDougald Gymnasium.

Pictures - (1) Elliot taking a three, (2) Elliot and Steve Johnson with Ridge and Corey (two of the kids our members sent to Carrawell James Basketball Camp), (3) LT readies to dunk[/private]