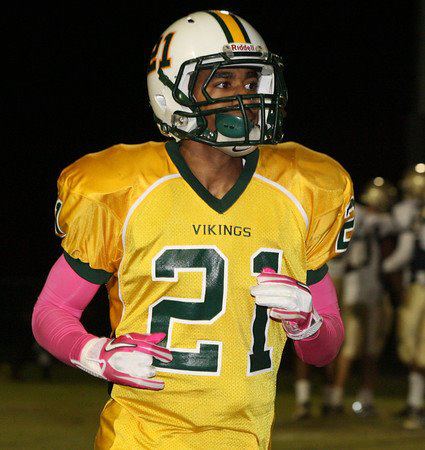 During Coach Cutcliffe's revitalization of Duke football, he has maintained the program's reputation for featuring the top student-athletes in the ACC. A year ago, the program led the ACC with 19 Academic All-Conference selections, more than three times any other ACC program. The goal is to match that success in the classroom with the results on the field, and ultimately, that effort starts on the recruiting trail. This weekend, Coach Cutcliffe extended a scholarship offer to a top student-athlete from Virginia, who he hopes can help the Blue Devils continue to build their success both in the classroom and on the field.

My understanding for the game. I’ve been told that I have a very high football IQ. I use that to my advantage. I study a lot of film, I study so much film to the point where I know if they run a certain play, I know what their whole drive will consist of. My footwork, I play soccer, so at my position footwork is a big deal. My quickness and my speed, I run a 4.42 [second] 40 [yard dash] and 3.91 [second] 20-yard shuttle.

BDN: Is business something you want to study in college?

BDN: Where do you stand with offers and visits now?

I have 6 offers, most recent came from Duke yesterday. Earlier this week, on Tuesday, I got one from Wake Forest. On Friday, last week, was West Virginia. Thursday last week was Boston College and Wednesday last week was Ohio. Two or three weeks ago, my first offer came from Illinois.

I’ve visited Duke and UVA thus far. I’m really trying to plan a visit to West Virginia and then April 13th I’m going to Northwestern, they’re interested and talking about a possible offer. On the 14th I’m going to the University of Illinois.

BDN: Can you talk a little bit about your visits to UVA and Duke and what stood out to you about those schools?

Virginia, I talked to Coach Poindexter and he invited me to their Junior Day so we went down and visited, sat down and went over some film with Coach West, nothing serious. Duke, I’ve been in contact with Coach Roper for quite some time now, I went to spring practice, liked what I saw, had a chance to see the position coaches, watched film with them in a meeting, and then at the end of the day, Coach Cutcliffe called me into his office along with my parents. He told me he wanted to extend me an offer and thought that I would be a perfect fit for this school with my upbringing from my parents and how it’s hard to find true student-athletes that excel both in the classroom and on the field, and he really liked that about me.

I had been saying November/December, but now, after the way things have been going the past couple of weeks, I really don’t have a timeframe. I’ve prayed about it with my parents and when I get that feeling, I’m going to make the phone call and drive or fly to whatever school and talk to the coach.

BDN: Thanks a lot, Evrett, and best of luck. 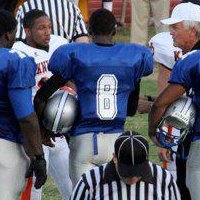 When it comes to recruiting, being the first school to offer a prospect is rarely a bad thing. After National Signing Day, the Duke coaching staff turned their full attention to identifying the top student-athletes in the class of 2013 and inviting them to campus. Breon Borders, a 6'1" 170 pound cornerback from Statesville, NC, picked up his first scholarship offer from the Blue Devils on a February 25th unofficial visit to Durham. A converted wide receiver, Borders has become a lockdown corner in the high school ranks and he features the combination of size and speed to become a playmaker at the college level.  BDN caught up with the big cornerback to discuss his interest in the Blue Devils and get an update on his recruitment. [private]

I’m a really tall corner, and I’m faster than people think I am. I can defend the tall receivers, I’m really good at man coverage. My advantage is I’m long.

I’m looking for a coaching staff that really cares about the players and a great football team, a team that really wants me.

BDN: Do you have any ideas for what you might want to study in college?

I’m still open at this point.

BDN: Where do you stand with offers and which schools are you hearing from the most?

I’ve got my only offer from Duke, but I’m hearing a lot from Wake [Forest], Clemson, and UNC sometimes, too.

I’ve been to Duke, I’ve been to Clemson, UNC, Wake [Forest], NC State, ECU…and I think that’s about it right there.

BDN: Are there any coaches you have started to develop a close relationship with?

I’ve really…I’ve got a good relationship with Coach Jones from Duke, he’s put a lot of effort in and I feel like he really has put time into getting to know me.

BDN: Are there any other schools you plan to visit or would like to hear from?

My coach has a couple plans that I don’t know about, but I would like to visit Clemson again, Wake [Forest], Duke, and ECU again.

My top schools are Duke, Clemson, and Wake Forest, but I’m leaning towards Duke right now. I’m probably going to make a decision, probably sometime before the season starts.

BDN: Thanks a lot, Breon, and best of luck.

Alright, thanks, you too.