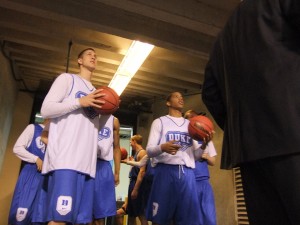 INDIANAPOLIS - Duke freshman Andre Dawkins would be a high school senior this season, but by leaving a year early he landed himself in the Final Four.  Dawkins, as most of you know, graduated one year early and the youthful freshman  hopes to build upon his last outing where he scored 6 points against Baylor.  BDN caught up to an obviously excited Dawkins and here is what he had to say -


DURHAM - Selected Duke Men's Basketball  players addressed the media in Cameron Indoor Stadium today and BDN was on the scene before we head out to Indianapolis for the Final Four.  In this audio chat, Mason Plumlee talks of his homecoming and more.  Check back in for our Duke-West Virginia preview, more player interviews and a interview with Quincy Miller and more as the week progresses.