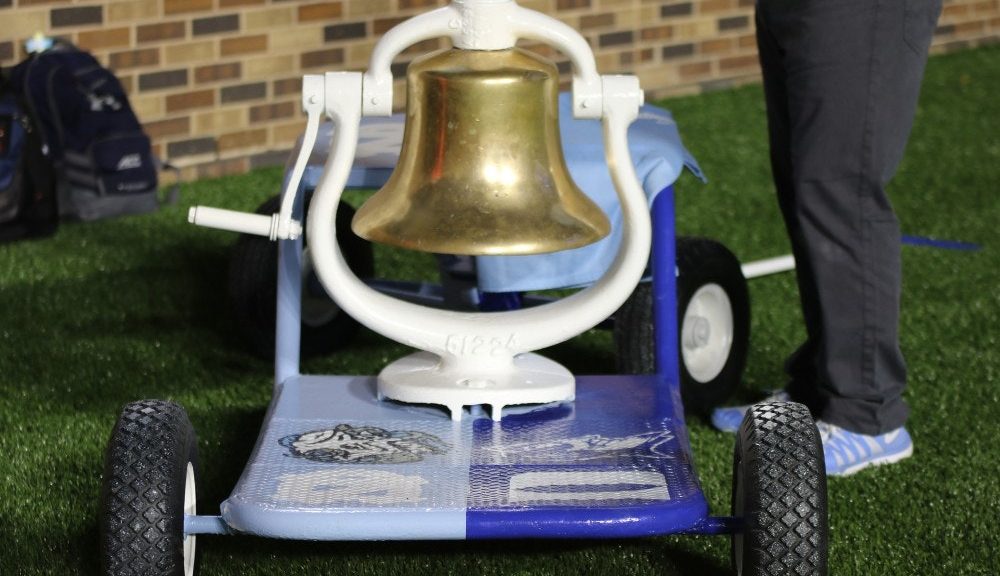 When Duke and North Carolina take to the field this Saturday at 4:00 in Kenan Stadium in Chapel Hill it's all about the Victory Bell.

The Blue Devils have won three consecutive games in the series but each of those contests has been close. This season, a rejuvenated North Carolina team comes into the game as a 3 point favorite and for good reason.

The Tar Heels are the best 3-4 team in the nation. Does that comment sound strange to you? Well, if one takes a closer look at the situation it shouldn't.

North Carolina has been within 6 points of their opponent's win or lose in every game this season. And that is a fact against a solid schedule. The Tar Heels opened the season with a bang with wins over South Carolina (which beat Georgia) and Miami.

The Tar Heels played #2 Clemson even until losing at the end 21-20. Losses have come by 3 points to nationally ranked Appalachian State by 3, 2 points versus Virginia Tech last week in 6 overtimes in Blacksburg and a 6 point loss on the road to a solid Wake Forest team. Their four losses have been by a combined 12 points.

As for similar foes, Duke played its best game of the season against Virginia Tech winning large and they defeated Georgia Tech 41-23 at home while the Tar Heels defeated the Jackets on the road 38-22.

Unlike Duke which was dismantled by Virginia a week ago and Alabama in their opener, the Tar Heels have been competitive in every game.

The intangibles in my opinion point to a Tar Heels win. They are playing at home. They have the confidence they can play with anyone, they have a quarterback who has thrown for 20 touchdowns with a mere 3 interceptions as well in freshman Sam Howell.

But the one thing which has boosted North Carolina this year was the addition of head coach Mack Brown who has made the season fun for their players again. And you know the calendar has been circled from day one for the October 26th game with Duke.

The intangibles on the Duke side of the ball are in play as well. Can the Blue Devils put a horrid loss to Virginia behind them? Can they match the Tar Heels hunger to reclaim the bell circling the wagons for a win?

The Duke offense has been hit or miss of late and slow starts have caused the Blue Devils to lose to Pitt, and aforementioned Virginia as well.

Two of the Blue Devils wins are over North Carolina A & T and Middle Tennesee, making the win over Virginia Tech their best of the season to date.

The cold-hard fact is if the remaining games the schedule were all played tomorrow, Duke would be the underdog in all but one of them.

That should tell you how important this game is for Duke in that they need two wins to get to bowl eligibility with a tough schedule ahead.

The Duke defense has played well overall but they have been put into hopeless positions of late. Be it turnovers or failed fourth-down conversions, the defense has been on the field with their backs against the wall far too often.

What that points to is a sputtering offense. Few playmakers have stepped up of late for Duke. There have been too few downfield passes, breakaway runs, etc.

While I may have made all this sound like doom and gloom, a win for Duke would flip the season back to a favorable position. They would be one game shy of their sixth bowl game in seven seasons and retain the Victory Bell.

Let's face it, winning the bell makes for a good season in the rivalry. And that means the hungriest team will end Saturday on a high note.

But the danger in this game is that Duke seems to ride the momentum and there has not been enough of that of late. And if momentum is going their opponent's way it seems to come in waves.

Duke cannot afford to give the Tar Heels any momentum they do not earn. A turnover could start the wave of confidence for an opponent which is hungry to flip the switch on close losses to good teams against their rival. If they get on a roll, they will not hold back.

It is just hard to have a lot of confidence in Duke coming off a loss similar to the Wake Forest debacle a season ago. Meanwhile, their rival has played inspired football and been in every game against stiff competition.

While this may not be a popular statement, losing to Duke three consecutive times is a nightmare scenario for the guys down the road. On the other hand, a loss for Duke points to better luck next season.

If Duke can pull this win off, the sunshine will be bright again on the program going into their off week. This is the Blue Devils third crossroads game this year. They lost the first two to Pitt and Virginia which makes the Coastal Divison a pipe dream.

A win in this game would mean wonderful things for the program and cure a lot of ills. A loss would drop the team to 4-4 and answering questions during a long off week before playing Notre Dame at home.

My picks are 6-1 straight up for the season and 6-1 against the spread. I would like to be wrong this week, but the pick here is North Carolina 31 Duke 24