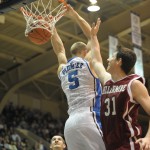 As Duke prepares for Wake Forest, select players took to the podium. Hear what they had so say through BDN Video - 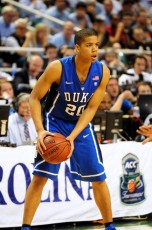 • Carter Blackburn (play-by-play) and Jason Williams (analyst) will call the game for ESPNU.

• Duke and Michigan State are the only teams in the NCAA to rank in the top 5 in RPI, Strength of Schedule as well as the AP and ESPN/USA Today Coaches polls.

• Duke and North Carolina are tied for first place in the ACC and each have two games remaining, including their March 3 showdown in Durham.

• Thursday’s game marks the 236th meeting between Duke and Wake Forest, tying it as the most-played series in the ACC.

• Duke has won four straight in the series overall. During that four-game win streak, Duke owns a +18.0 scoring margin. Duke has scored at least 90 points in three of those four meetings.

• The Blue Devils’ last 14 wins in the series have

• Mike Krzyzewski is 40-23 at Duke against the Demon Deacons. The Blue Devils are 15-14 under Coach K on the road against Wake Forest.

• The Blue Devils have won 24 of the last 29 meetings between the two schools.

l Duke has been ranked in the top 10 of the AP Poll for 91 straight weeks, tied for the second-longest streak in NCAA history.

l Duke is 7-0 in ACC road games, marking only the fifth time in school history that Duke has won its first seven league road games. Only three Duke teams have gone undefeated in ACC road play, the most recent being the 1999-2000 team (8-0).

l The Blue Devils have scored at least 73 points in all seven ACC road games.

l Duke won its 25th game of the season last Saturday versus Virginia Tech and now has at least 25 wins in 13 of the last 14 seasons. Duke has won at least 25 games in 23 of Mike Krzyzewski’s 32 seasons as head coach.

l Austin Rivers has been named ACC Rookie of the Week a league-leading eight times. He earned the league’s most recent rookie award on Monday after averaging 21.5 points per game in wins over Florida State and Virginia Tech. Rivers is the ACC’s leading freshman scorer (seventh in the NCAA) at 15.5 points per game.

l Miles and Mason Plumlee combine to average 16.4 rebounds and 17.3 points per game. Mason ranks second in the ACC with 9.5 rebounds per game while Miles ranks 10th with 6.9 boards per game. Either Miles or Mason has led Duke in rebounding in 27 of 29 games this season.

l Andre Dawkins leads the ACC with a .414 three-point shooting percentage. Dawkins is 65-of-157 from beyond the arc this season and ranks third in made three-pointers. He set a Duke record for threes in a half with seven treys in the opening 20 minutes of Duke’s win over Wake Forest on Jan. 19.

l Duke averages 24.9 points per game off the bench with 11 games with 30 or more bench points. The Blue Devils have had a double-digit scorer off the bench in 21 of 29 games this season.

l Miles Plumlee is averaging 8.2 points and 12.2 rebounds (4.4 orpg.) over his last five games. The senior forward has grabbed 10 or more rebounds three times in that span.

l Duke’s perimeter defense has improved significantly over the last 14 games. Duke has held those 14 opponents to a .290 shooting percentage from beyond the arc and allowed just three of those teams to shoot better than .350 from three-point range. Only four of those teams have hit more than five three-pointers in a game.