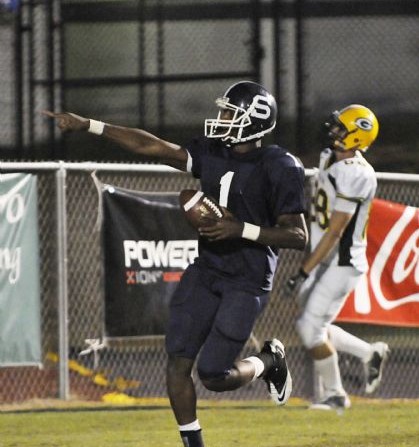 When Head Coach David Cutcliffe came to Durham, he vowed that he would transform the Blue Devils into a faster and more athletic team. In his first few recruiting classes, he has added several high-level athletes, including Isaac Blakeney in 2010 and Jamison Crowder in 2011. The coaching staff is looking to continue that trend in the class of 2012, and recently hosted a speedy, versatile athlete from the state of Georgia. Micheal Summers is a 6’1” 190 pound athlete from Statesboro, Georgia. As a junior, he played on both sides of the ball, totaling over 1100 all-purpose yards and 10 touchdowns, leading the Statesboro Blue Devils to a 11-3 overall record, falling just short of a state championship. The talented athlete made the trip to Durham this past weekend and came away with his first verbal scholarship offer. Highlights from his junior season can be found here.

BDN: You’ve played multiple positions very well in high school. Do you have a preference for what position you play in college, or have coaches told you they are recruiting you for a specific position yet?

BDN: You guys came up just short of a state championship at Statesboro last year. What are your goals for yourself and for your team in your senior year?

Well of course our main goal, you know, is to win the regional game and to make it back to the playoffs, and to win the state championship.  We believe we can accomplish those goals, ‘cause you know, we have a lot of our players coming back from last year.

The most important things I’m looking for in a school is the education, and the academic side of the school, ‘cause if coaches aren’t graduating their players, then, you know, it’s really no good because there is life after football also.  It’s not just about football, because one day football is gonna come to an end.

BDN: You mentioned the importance of academics; do you have a specific field that you would like to study in college?

Schools I’ve been hearing from the most are Duke, Georgia Tech, East Carolina, Louisville, Syracuse, Illinois, a little bit from Vanderbilt and South Carolina State, and North Carolina.

Are there any schools in particular that stood out for me?  Duke.  Duke’s really stood out for me, you know, based on their academics, and I really like their coaching staff.  They have a good group of coaches there, Coach Middleton, and Coach Cutcliffe.  They’re very nice guys.  And Coach Roper.

Yes, this spring I plan on visiting Louisville, on East Carolina, and maybe some other schools.  But as far I know, those two.

BDN: Thanks a lot, Michael, and best of luck to you.