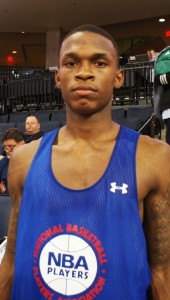 Super quick point guard prospect Joe Jackson made his presence felt at the NBAPA Top 100 Camp this past weekend.  Jackson stands just 6-0 and weighs in at 180, but his presence is big on the court as he slashes through opposing defenses.  BDN Premium has a one on one interview with the budding Memphis native who mentions that Duke [private] has contacted him.

Here is an audio update from this mornings session - 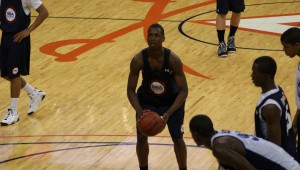 The action is steady at the NBAPA Top 100 Camp and BDN will be giving you free updates throught out the weekend.  Here is part 2.  Join BDN Premium for full access. 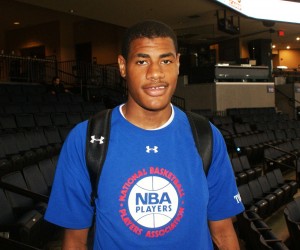 Here is the second of several interviews from the NBAPA Top 100 Camp. [private]

This is Mark Watson reporting from the NBA Top 100 Camp with Mychal Parker sitting beside me.  Mychael, talk about your experience so far.

My experience has been really good.  I'm real excited to be here because you have to be chosen to be here.  I'm excited to play against some of the guys here, many that will make it to the NBA.

A lot of people are wondering what's going on with your recruitment, can you talk about that?

How would you describe your game to someone that had never seen you play?

I'm a great slasher.  I try to be a good leader on the court, being vocal.  I'm working on my shot to make it more consistent this season.  I'm just working hard.  I like to play defense as well.

Tell us about Mychal Parker off the court?

Sometime I like to be relaxed, but I will go with my Dad and work out and lift weights.  Just chill, man.

With you playing in so many AAU tournaments, how much spare time would you say you had at these events?

Spare time? (smiling) None!  So whenever I get a chance, I'm chilling.

You've now played in three games - who are some of the toughest players you've gone up against thus far?

Michael Gilchrist, Roscoe Smith and Reggie Bullock.  I went up against those three.  I wanted to go up against the top players and shut them down, I didn't want them to go off on me.

Back to recruiting, do you have a timeline on when you'll make a decision?

Next spring, but I'll cut my list this July.

So, when that list is made that's it?"  Nobody else gets in?

Who will play the biggest role in helping you make the final decison?

Did you learn your basketball skills from him?

Yeah definitely, he taught me everything.

My mom?  She was just a girly girl.

In a perfect world what would happen in the next two years of your life?

For one to be the best I can be on the court and off the court.  And two, just make something out of my life.

Mychal Parker, thanks for your time and good luck the rest of the way.