DURHAM, N.C. – Duke wide receiver Conner Vernon has been named to the Freshman All-America team by Sporting News, announced on Wednesday by the national publication.

In addition, Vernon was joined by teammates Brian Moore and Desmond Scott on the Sporting News Freshman All-ACC squad.

Moore, a 6-3, 275-pound offensive guard from Coral Gables, Fla., started all 12 games at right guard in 2009, helping the Blue Devils lead the ACC and rank ninth in the nation in passing offense (305.0 ypg).  Moore helped the Duke offensive line rank third in the conference in sacks allowed per passing attempt (17.89) behind only Florida State (20.65) and Clemson (19.79).

Scott, a 5-10, 185-pound running back from  Durham, N.C., earned a spot on the all-freshman unit as a specialist after returning 18 kickoffs for 452 yards, good for a 25.1 yards per return average that ranks fourth in the ACC and sits third on the school’s single-season chart for rookies.  In the season finale against Wake Forest, he returned seven kickoffs for 211 yards – the third-highest single-game total in Duke history – en route to setting a new school single-game record for all-purpose yards (259) by a freshman. 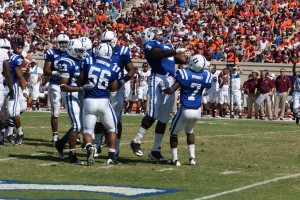 A 6-5, 305-pound native of Houston, Texas, Oghobaase is Duke’s first defensive lineman to receive All-America honors in the modern era.  In addition, he becomes the 59th player in Blue Devil football history to earn All-America accolades.

While helping Duke to its highest win total since 1994, Oghobaase started eight games this year and recorded 37 tackles, 7.5 tackle for loss and 2.5 quarterback sacks despite missing four contests due to injury.  A two-time honorable mention All-ACC pick in 2008 and 2009, Oghobaase played in and started 44 games and finished his Duke career with 165 tackles, 36.5 tackles for loss and 14.0 sacks.  On Duke's career charts, he ranks fifth in sacks and sixth in tackles for loss.