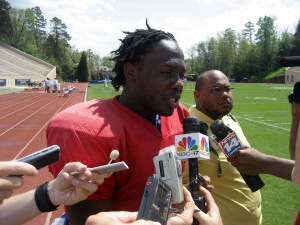 Blue Devils to a 41-31 win over Navy this past Saturday, the league office announced on Monday afternoon.

Lewis, a junior quarterback from Opa-Locka, Fla., was named the conference's Offensive Back of the Week after completing 25-of-35 pass attempts for 317 yards and three touchdowns while rushing for a career-high and team-best 41 yards on 12 attempts.  In addition to extending his school record streak of consecutive pass attempts without an interception to a nation's active best 206 tosses, Lewis and teammate Eron Riley became Duke's top touchdown-producing quarterback-wide receiver tandem with three scores on the day and 17 in their careers together.  Against the Midshipmen, Lewis and Riley hooked up for touchdown passes covering 27, five and 49 yards.

Rey, a junior outside linebacker from Far Rockaway, N.Y., was tabbed the league's Defensive Back of the Week following a 12-tackle performance that included four tackles for loss, one sack and one fumble return of 37 yards for a touchdown.  Rey helped the Blue Devil defense hold Navy to just 207 rushing yards -- 245 below their NCAA-leading average of 452 entering the contest.