[private]The Duke Blue Devils have the opportunity to build on their early season success when they host the Virginia Cavaliers on September 27th, at 12 noon, in Wallace Wade stadium. Specifically, the 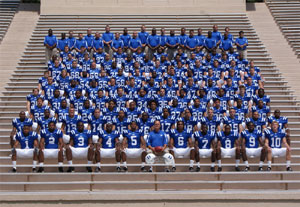 - Duke has dropped eight straight games to Virginia with the last Duke victory being a 24-17 overtime decision on October 9, 1999, in Charlottesville. So the Blue Devils have the opportunity to stop an eight game losing streak to the Cavaliers.

- Finally, Duke has the opportunity to improve their overall record to 3 – 1, which would be the best start to a season since Duke opened the 1994 season 7 – 0.

It is not an exaggeration to state a win over Virginia is critical for Duke’s season. This is an important game for Coach David Cutcliffe in his expedition to change the culture of Duke football in that a win over an ACC opponent will validate the legitimacy of wins over a FCS team and a service academy.

The 1 – 2 Virginia Cavaliers have struggled to put points on the board so far this season. They are averaging 11 points per game, while giving up 32 points per contest. Duke’s defense has held opponents to less than 21 points per game, while the Blue Devil offense has averaged just over 30 points per contest. It is important to note that one of Virginia’s losses came against USC the number one team in the country. A game against USC has the potential to ruin a team’s statistics, just ask Ohio State.

Internet fan sites and message boards are buzzing with discussion of a resurgent Duke football program, and even though Duke has a ton of work and multiple steps ahead of them, a win over Virginia will be a big step toward achieving success. Success breeds success so winning games in 2008 will assist Coach Cutcliffe in recruiting top notch talent to Durham, which will result in more victorious Saturdays in the years ahead.

The next step in the resurgence of Duke football is to snap the 25 game ACC and eight game Virginia losing streaks with a victory over the Cavaliers on September 27th. The game will be telecast on ESPNU.[/private]