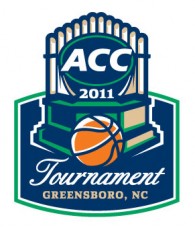 North Carolina 61 Miami 59
The Tar Heels won on a buzzer beater where Kendall Marshall found Tyler Zeller wide open for an easy lay in.  Oddly, that was the only time UNC led in the entire contest.  The Tar Heel guards didn't score in the first half from the field, but they warmed up int he second, especially from the three point stripe.  Both Leslie McDonald and Marshall hit big threes and when is the last time UNC hit 10 three pointers in a half?  The Hurricanes defense stymied the Heels early in that they played a tight zone.  That zone loosened up dramatically when Reggie Johnson got his fourth foul.  Anytime a team wins a game like this one, it generally gives them confidence in the next contest and more importantly momentum.  I feel UNC will have little problem in advancing to the title game, especially since they dominated the afternoon session crowd, making the Coliseum Dean Dome West.  After shooting 30.4% in the first half and 55.6% in the second from the field.  Miami got a total of two points from their bench.