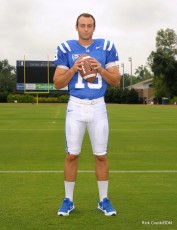 BDN caught up to Sean Renfree after a recent practice and got his thoughts on his last scrimmage.

How do you feel you perfomed in the scrimmage?

As for my performance, I thought it was lacking at times in situational stuff but we were in a good rhythm throwing the ball there for a while.  Conner, Donovan were great out there and as a group I though we were solid and that the offense was clicking.

You have a lot of offensive weapons this season.  That has to be nice.

No doubt.  When you say we've got a lot of good weapons, it's true.  We've got older guys that have proven themselves and they're some of the best players in the ACC.  Now, we have young players stepping in and making plays.  It's encouraging to know that when guys come in you won't miss a beat.

What do you think of the run by Juwan Thompson?

Usually people don't keep going when Matt hits them like that.  It was truly an amazing run and takes a lot of drive to get hit like that, cut across the field.  He's a big, strong back and he'll help us this year.

The running backs looked good today in that the top three guys all had a big day.

To have a run game like that and know you don't have to throw fifty times a game to win makes a huge difference.

What happened on the turnover where Desmond Johnson got the interception and returned it for a touchdown? [News & Observer]

I was trying to do to much there, it was stupid and I should have taken the sack.  I talked to Coach Roper after and he said you have to know when to take the sack and not always try and make a play.