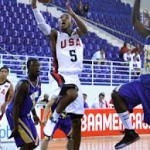 COLORADO SPRINGS, CO—On the surface, it may seem odd to put the words “sophomore” and “veteran” in the same sentence. For Duke sophomore to-be Rasheed Sulaimon, though, he’ll step into a leadership role this upcoming season after a promising rookie campaign in Durham.

An All-ACC freshman last year, the 6-foot-3 and 180-pound shooting guard averaged 11.6 points, 3.4 rebounds and 1.9 assists per game while starting most of the season in his first year as a Blue Devil.

As the squad’s best creator off the bounce last season, ‘Sheed—a favorite amongst the fan base—even carried the senior-laden Blue Devils in a few huge games, notably in big wins over Ohio State (17 points), Maryland (25 points) and Creighton (21 points).

Sulaimon arrived in Colorado Springs with eyes set on making the U.S. National U-19 team and bringing home a gold medal, while continuing to enhance his game as he gears up his second collegiate season. He’s accomplished the former and has done so against elite competition on a daily basis in practice. Fellow team members Elfrid Payton of Louisiana Lafayette, Houston prep standout Justise Winslow, Florida’s Michael Frazier, Washington-bound Nigel Williams Gross and Oklahoma State’s Marcus Smart—who spurned the opportunity to be a potential top-5 pick in this year’s NBA Draft to return to Stillwater for his sophomore year—have all pushed Sulaimon immensely during training camp.

Getting into the paint and hitting mid-range and long-range jumpers consistently, Sulaimon was among the most assertive individuals on the floor in Colorado. After winning the gold medal with the U.S. U-18 team last summer, ‘Sheed has been one of the most vocal during practices, so it’s no surprise he made the final, 12-man roster.

Off the court, Sulaimon has been rooming with fellow U-19 teammates Jahlil Okafor and Winslow—two coveted Blue Devil recruiting targets in the class of 2014—making this U.S. experience all that more critical on the Duke front.

Sunday evening, the rising sophomore took time to reflect on his experience with the U.S. National Team and his performance, as well as his thoughts on what looks to be a vastly different Blue Devil team for the 2013-14 college basketball season.

Question: First off, I see that you have your left wrist all taped up today. What exactly happened?

Answer: “Yeah, just Duke basketball. I was diving for a loose ball yesterday and kind of hurt my wrist, got a little floor burn and got a big blister. I’ll be alright, though.

Question: So, it’s nothing to severe then?

Answer: “No, nothing too severe. It should be fine.”

Question: What has this U.S. basketball experience been like for you going against the best of the best in an entirely different setting like this? How does this help you grow as a player?

Answer: Well, first and foremost it’s just an honor to be here. Great coaches and top guys that I’m competing against everyday. It’s been great so far. Like I said, it’s been very competitive. I’ve been learning a lot of new terminology, and we’re already strategizing for our game plans in Prague. So, everybody is getting read and there’s been great energy here so far.”

Answer: “I went home for a little bit, and I’ve just been working out each and everyday twice a day.  I went back to Duke for the K Academy and then came back home. Now, I’m here. If I don’t make it here, I’ll go to Kevin Durant Camp, but as you can see hopefully I make this team.”

Question: So, you’ll be back at Duke for the second summer school session? And the whole team will be together from that point on, correct?

Answer: “Definitely. As soon as I get back, I’m going straight back to Duke. No time off.”

Question: You have been rooming with your buddy Justise Winslow and Jahlil Okafor—two guys Duke is heavily involved with—here in Colorado Springs. What’s the dynamic been like between you and those two guys?

Answer: “Those guys are very mature for their age. They are great players and more importantly they are great guys. I’ve enjoyed my time with them. We have formed a bond even though it’s just been a short amount of time here. Hopefully we can continue to develop a great relationship, and hopefully we can be future teammates as well.”

Question: So have you been doing any sort of recruiting on this trip?

Answer: “You know not really. They already have great respect for Duke, the program and Coach K. I’ve been through the recruiting process and sometime it can get a little bit annoying. But I’m here for them and if they have questions I answer them. More importantly, I’m their friend and I’m just trying to be a great teammate.”

Question: What all has the Duke coaching staff said to you in terms of what they want you to work on this summer? And what kind of role do they envision for you next year?

Answer: “Definitely I just have to get better in every aspect of the game. I have to get stronger, get quicker. I’ve really been working on my ball handling skills. And I think my role will be even greater next year, especially with the loss of the three seniors and captains. Just stepping into that leadership role, I’ve been there and I know what to expect now. I’ve got to help the younger guys and help everyone be on the same page because as soon as we get back [in July] we’re working for a championship.”

Question: Next year’s squad is going to look a lot different than year’s past. Lots of athletes, lots of wings, lots of versatility. What are your thoughts on the style of play Duke fans are going to see with you, Rodney Hood, Jabari Parker and the rest of the team?

Question: Three promising freshman set to arrive in Durham here shortly: Matt Jones, Jabari Parker and Semi Ojeleye. What is your relationship like with those guys?

Answer: “I’ve known Matt Jones for a pretty long time. He’s a Texas kid as well, so I’ve always been pretty close with him. Jabari, me and him met each other about three years ago on the AAU circuit, and we’ve always had a great relationship. He’s a great kid. And Semi is the only guy I need to get to know more. He seemed like a great person on the couple visits he took to Duke. I’m just excited. Everyone is looking forward to the season. And like I said, we have the opportunity to be a special team and have a special year.”

Question: In today’s culture of college basketball, sophomores are a lot of the time veterans. Do you plan to kind of take these freshmen under your wing this upcoming season?

Answer: “Definitely. And that’s a challenge that Coach K wants me to take. Like I said, I’ve gone through a year of this and just like guys took me under their wing last year, now it’s my turn. I’m next in line. I have to step up in that leadership role quickly here and be a leader to those guys.”

Question: Back to the U-19 team, what are your thoughts on the style of play implemented by VCU head coach Shaka Smart and Florida head coach Billy Donovan?

Answer: "It's fun. It's relentless, but I like it and I think it fits our team well with us being so athletic at every position."

Question: Talk to me about some of the individual matchups you’ve had here at this training camp. Marcus Smart, another Texas guy, and some of the others. Who has challenged you the most here?

Answer: “Everybody here can play. Damyean Dotson [Oregon], a fellow Houstonian, Michael Frazier [Florida], Marcus Smart [Oklahoma State] and even Elfrid Payton [Louisiana Lafayette]. All these guys bring something different to the table. They can shoot, they can dribble. Marcus is strong. I’m seeing every kind of guard that I’m going to see here. I’m pretty sure the competition that we’re having going against each other everyday is as good as anything I see in the season.”