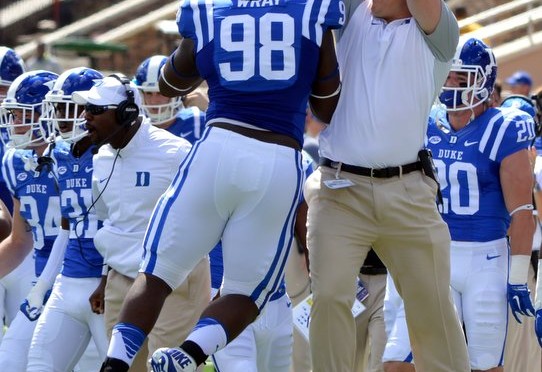 There will be no more talk of the officiating debacle which cost Duke a victory over Miami moving forward for the Blue Devils football team.  On Tuesday's media gathering it was clear that the Duke players and David Cutcliffe were in forward thinking mode focusing on the upcoming game with North Carolina.

Cutcliffe was already thinking ahead as any good coach does after the game with Miami.  He hinted less than an hour after the loss that his team would move on by Tuesday and that he hoped the media would respect that.  Cutcliffe knew then that there would be plenty of fall out from the game that ended in embarrassment for the ACC.  And he was already mapping out if not worrying that his players would lose two games instead of one from the result.

A season ago North Carolina had more than their way with the Blue Devils dominating the contest.  Adding insult to injury, some of the Tar Heels players left the Duke locker room with painted evidence.  Damage costs were sent to Chapel Hill where some over zealous celebration types painted the Victory Bell which the teams play for each season.

The rivalry returned as Cutcliffe and staff righted the ship where he has done something the Tar Heels have yet to experience.  That being, he has led Duke to a Coastal Division title.   But as has been said, that momentum was thwarted a season ago when Duke looked flat in the lop sided loss.

Should Duke come out flat this week in Chapel Hill, Cutliffe knows the game could again turn ugly.  North Carolina has the most potent offense that Duke will have faced to date.  Like Duke, they have circled this game on their calendar.  In fact, some of their players took to twitter stating that they were pulling for a Duke win.

What we should have are two ranked teams, each 7-1 going at it for the Coastal Division lead.  What we still have is a game of equal importance.  Duke has to win this game to realize their pre season goal of playing in the ACC Championship game.  And a loss would actually hurl them back into a crowded pack.

So yes, David Cutcliffe knows his team has to move on.  "I'm not looking for any rah-rah stuff, but focus," stated Cutcliffe on Sunday.  In a game where Duke has been tabbed an 8.5 point underdog it will take said focus and a solid effort for dreams to be realized.

Face it, the one way to put the Miami game truly behind them is to win and take care of the business at hand.  Should Duke reclaim the Victory Bell on Saturday, their goals are still in tact.  Quite simply Duke has to put in the work to get anything done.

The interest in the game will provide a standing room crowd only not only for the fans but for media.  Just this morning a warning of overflow media was sent out by the UNC SID Department, meaning that some will be relegated to the photo area.

What this all means is this is a big game.  A really big game.  Both Duke and North Carolina need the win and both programs want the win.   By 4:00 or so on Saturday another team will be feeling the blues.  The only way Duke can prevent that from happening again is let the past be just that.  There is an opportunity at hand and that and that alone should be the focus.