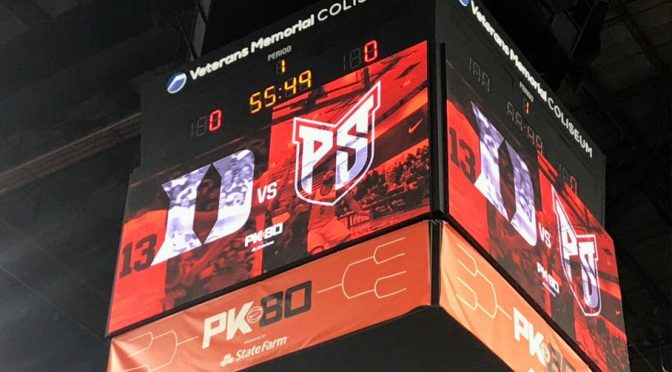 Duke found itself down by as many as 8 points to a pesky Portland State (4-1)  team while letting up 49 1st half points.  But the Blue Devils made some half time adjustments and their size eventually wore down their opponent for a  99-81 win.

After a lack luster effort from some starters in the first half, Duke started Alex O'Connell and Marques Bolden in the 2nd half.  Bolden ended the game with 6 points and 9 rebounds while O'Connell tallied 9 points.  Both players play helped keep Duke close going into the half.

Trevon Duval led Duke in scoring finishing the game with 22 points but had 5 turnovers to just 2 assists.  Grayson Allen had another off day shooting but still ended the game with 14 points but more importantly a team high 9 assists.

The Blue Devils were once again aided by a solid effort from  Marvin Baglkey III.  The stellar freshman had his double-double of the season where he dropped 18 points to go with 15 boards

The Vikings challenged Duke early and this game was a good learning experience for a young team.  Teams are going to come after the Blue Devils hard and there is no doubt that Portland State will be very good in their league.

Mike Krzyzewski moved pastJohn Wooden of UCLA playing in the most games with his team ranked number one in the country.  Duke will now move to the semi finals of the Motion Bracket of the PK80 tournament where they will face the winner of the Butler vs Texas game which tips off at 5:30.