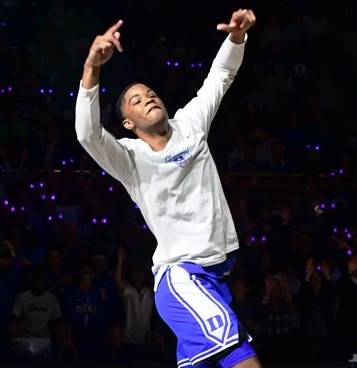 Perhaps the number given to Cassius Stanley's was a hint that he could play. The California freshman who led Duke in scoring with 19 points against Colorado State dons number two for the Blue Devils.

A quick look at Blue Devils past shows that some good players have worn #2 over the years. A season ago the number belonged to Cam Reddish and Gary Trent Jr. before that. You can trace the number back to two national champions in Quinn Cook and Nolan Smith as well.

Whether the number assigned to Stanley has anything to do with his ability or not, after just two games he's shown he is more than capable of handling a starting nod on the 2019-20 Blue Devils.

The Los Angeles native has had immediate success on the court this season. Stanley was wonderfully efficient in the Duke win over Colorado State. The self-proclaimed LeBron James and Lakers fan, went 8-11 from the field for his 19 points,

But Stanley is more than just instant offense. A quick look at the box score shows he grabbed a team-high 7 rebounds and added a blocked shot for good measure in 25 minutes of play.

Duke won a defensive slug-fest against Kansas and Stanley scored 13 points in that game on 5 of 6 shooting. He also played 30 minutes, the second-most on the team.

You can already see that Krzyzewski wants Stanley on the court. And the reason for that is his efficiency. One of the most telling stats was the fact Stanley committed 4 turnovers against Kansas only to cut that down to zero in the win over the Rams.

Stanley has the potential to be a solid on-ball defender as well. He gets his hands on the ball and has stayed with his man in the 2-0 Duke start to the season.

It's also clear that Stanley likes to run the court and his two baskets against Kansas on the break were game-changing. Despite the early success, Stanley is still learning the Duke system and getting better as a player.

We have yet to see the finished product with concern to Stanley. But it is clear that he will play a vital roll on this year's team. The one thing which is evident early on is that Cassius Stanley can ball. And that is great news for this year's Duke team.