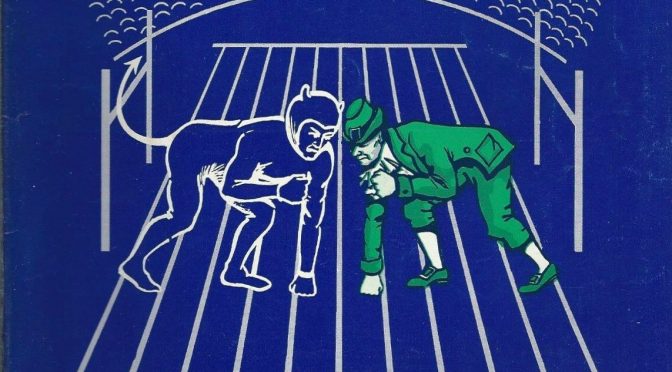 It has been a long while since the Notre Dame Fighting Irish visited Duke's, Wallace Wade Stadium. The year was 1966 and the result was a 64-0 loss which lives n less infamy only because of the passing of time. The Duke Administration had deemphasized the football program once Bill Murry retired and it took just a couple of years for it to show on the football field after a string of ACC titles earlier that decade.

A lot has changed since then. After years of losing with the exception of blips on the radar from a couple of years from Steve Spurrier and one good year under Fred Goldsmith, Duke managed to hire David Cutcliffe. That hire has led to Duke going bowling on a regular basis, something many thought impossible.

In fact, Cutcliffe is currently 1-0 against the Fighting Irish, thanks to a 38-35 2016 victory in South Bend. That was Daniel Jones coming out party, or, at least when NFL scouts started to take notice.

Duke is a couple of plays from being 6-2 this season. The Blue Devils have had a week off since losing the Victory Bell in an emotional loss to their rival. The question is whether the off week was enough time to refocus their efforts on getting to a bowl game.

The Blue Devils currently stand 4-4 and the upcoming slate starts with the Irish, followed by Syracuse, Wake Forest, and Miami. Finding two more wins will not be an easy task.

Notre Dame is a very talented football team. The Irish stumbled against their rival Michigan and currently stand ranked 15th nationally with a 6-2 record. Make no mistake, the goal of their program is to win out, starting with Duke.

The Irish showed early game hangover symptoms a week ago where they edged Virginia Tech, Duke, of course, throttled the Hokies but were blown out by Virginia, a team the Irish handled easily.

What may work in Notre Dames favor is a sudden drop in temperature for the 7:30 kickoff time on the ACC Network. Duke is expecting a large crowd to see the Irish-Blue Devils clash on Brooks Field. Fans are encouraged to get to the stadium earlier than normal for this game.

The key in this game for Duke is to be in the contest going into the second half. More importantly, half time adjustments need to be positive for the Blue Devils have allowed 90 opposing team points in the 3rd quarter.

A win for Duke would work wonders in rekindling program interest. A victory on a big stage is always healing, but the Irish want nothing to do with said scenario.

Notre Dame has been tabbed an 8 point favorite this Saturday. I am picking the Irish this week in that they have a balanced offensive attack. That and the fact they escaped last week's trap game with the Hokies leads me to believe the Irish exorcised the demons of losing to a rival.

On the other side of the ball, it is less clear to know how Duke will respond where they lost to rival North Carolina last time out. Duke is capable of winning this game with a stalwart effort, but expecting them to be free of emotional debris while facing a nationally ranked team which was in everyone's top ten to start the season is a tall order.

As for my prediction, I stand 7-1 straight up on the season. I fell to 6-1-1 versus the spread where last week's game with UNC was a push at 3 points. I see Duke playing hard in this one, but the Irish will stand victorious in the end. Notre Dame 31 Duke 21