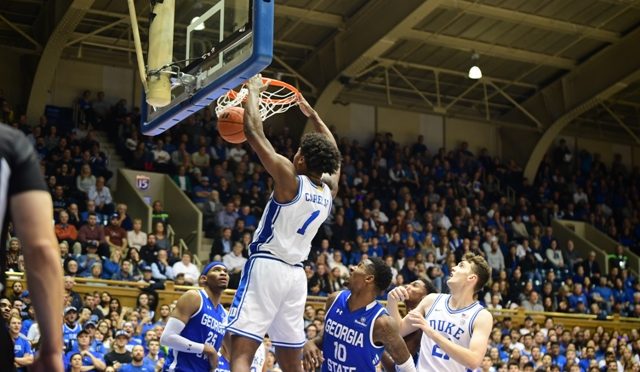 A few notes on Duke Hoops going into the 2K Empire Classic.

Vernon Carey Jr is connecting on 62% of his shots this early season. He scored a career-high of 20 points in the Blue Devils win over Georgia State. More importantly, Carey has recorded back to back double-doubles. Carey is still learning to play inside, but the versatile young big man is capable of taking his game to another level if recent success in the paint continues.

The Golden Bears were picked towards the bottom of the Pac-12 this season but Cal comes into the Duke game 4-0. First year coach Mark Fox already has the program going in the right direction and they own an early win over UNLV. The Bears are led by a tough sophomore shooting guard in Matt Bradley (20.0 ppg, 4.8 rpg). Duke holds a 1-2 all time mark versus the Bears. One of the more deflating Duke upset losses in history came against the Jason Kidd led Cal team in the NCAA Tournament.

Duke is no stranger to this event where the Blue Devils are 10-2. The only two losses the first two games against Stanford and Connecticut in 1999. There were a lot of questions after the 0-2 start but Duke rebounded to go 29-5 on the season. The Blue Devils are 10-0 since that time in what was called the Coaches vs Cancer Classic when the tournament started.

The Blue Devils have been tabbed a 19.5 favorite in tonight's game with Cal which tips at 9:00 on ESPN 2.

If the Blue Devils defeat Cal tonight, they would then face the winner of Georgetown (3-1) and #22 Texas (4-0). Some familiar names on the two possible opponents are Omer Yurtseven who transferred from N.C. State and is leading the Hoyas in scoring and rebounding. Texas leading scorer is Matt Coleman III whom Duke kicked the wheels on for a good time on the recruiting front. Texas is a 6.5 favorite over Georgetown coached. Shaka Smart who coaches the Longhorns once led Virginia Commonwealth to an upset win over Duke in the NCAA Tournament.