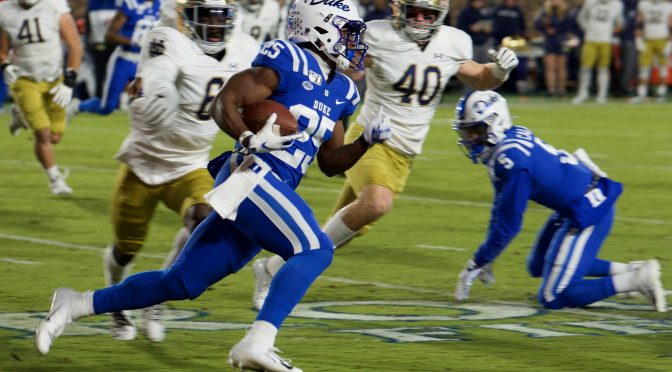 The Duke Blue Devils take on the Syracuse Orange in Wallace Wade Stadium this Saturday afternoon where they seek to end a three-game losing streak.

After starting the season 3-1, Duke has stumbled against ACC competition where they currently own a 2-3 mark which is good for sixth place in the topsy-turvey Coastal Division.

In their last three league losses, the Blue Devils have been within a play of winning two of the games. Now the team is coming off a lopsided loss to Notre Dame and they're facing the injury bug which most recently sidelined one of its offensive line leaders in the center, Jack Willoughby.

On the other side of the ball, the Syracuse Orange has struggled even more. So far this season, the team is winless in the league while owning a 3-6 mark in all games.

You can make a case that Syracuse is the most disappointing team in the league. They were considered a lock for a bowl game by many in the preseason, but they have had trouble stopping opposing teams offenses.

One has to think the Orange sees the Blue Devils as a chance to get their first ACC victory. A closer look at the teams on paper shows some pretty even stats and quarterback Tommy DeVito and their offense can put up some points.

Duke needs to get back to the basics in many ways. The team needs to come out on fire and not allow their opponent early game success in order to halt the losing streak.

The Blue Devils have struggled at times with their run game and to beat Syracuse they will need some success on the ground to keep the defense off the field. It is worth noting that Syracuse is also coming off a bye week where they have had extra time to prepare.

My gut tells me that this game could be closer than some people think. Duke has been labeled a 10 point favorite by the oddsmakers. The feeling here is that Duke will need a solid defensive effort to win this game.