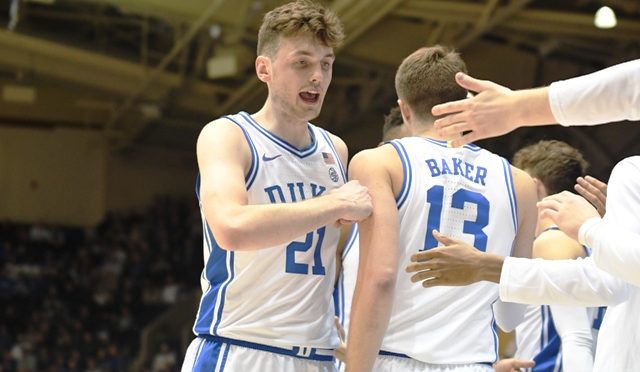 With benches socially-distanced and a number of other COVID-19 protocols, the Blue Devils were split into two teams of seven and competed for three 12-minute periods, each beginning with no score on the board.

In the opening frame, the White team shot out to a 17-4 advantage, led by eight straight points from freshman Jeremy Roach. The guard from Leesburg, Va., knocked down a pair of three-pointers 30 seconds apart before converting a layup in transition off a Jordan Goldwire dish.

The Blue squad would climb back in the final four minutes by way of a 9-0 run that was sparked by freshman DJ Steward, who tallied four points and two assists during the stretch to make the first period final score 24-15.

“It was an amazing feeling to get out there and play with the boys,” said Steward. “It feels great to be in Cameron. My teammates were setting me up and we had a ball out there.”

After a number of players switched sides for the second period, both teams came out trading buckets before a late surge from the White team that was fueled by graduate transfer Patrick Tapé. The forward had 12 points in eight minutes, including two dunks and a contested layup while being fouled. Steward's vision was on display throughout, with his three assists highlighted by a no-look pass that led to a Tapé flush as the White team came away with a 33-31 victory.

In the second period, the White team had eight assists while committing just one turnover. Steward and freshman Jalen Johnson each dished out three dimes with zero turnovers.

The final 12-minute period was dictated by runs. After a three by Michael Savarino pulled the Blue team within 17-14, another strong push from the White team opened up a 26-18 score with 2:48 remaining. The Blue squad would then surge back into it with a 7-0 run of its own capped off by a Henry Coleman III offensive rebound and put back. The effort proved to be too little, too late, as free throws by Steward and Johnson over the last 20 seconds secured the 30-26 win for the White squad.

Roach's 22 points over the three periods combined were the most of any player, and his five assists tied with Steward and Goldwire for the scrimmage lead. Roach shot 6-of-9 from the field and hit all eight of his free throw attempts. Coleman and Tapé led the way on the glass with 10 rebounds each while also contributing offensively, as Coleman scored 17 points and Tapé added 14. Sophomore Wendell Moore Jr., finished with 16 total points and went 7-of-9 from the charity stripe, while Johnson shot 7-of-11 from the floor for 17 points. Junior Joey Baker totaled five points in each of the three periods and finished the night 6-of-12 from the field and 3-of-6 from long range.

“It’s always good to be back in the home,” said Moore. “We miss the fans, but always great to play in this gym. It was a great scrimmage and can’t wait for another next Friday.”

The two squads combined to shoot 36-of-50 (.720) from the free throw line for the scrimmage. After getting more accustomed to the surroundings, the teams shot a combined 31-of-75 (.413) from the field over the final two periods.

The Blue Devils will meet at Cameron for another closed scrimmage next Friday night.